THE NO. 5 ORANGE SHOWROOM PUB 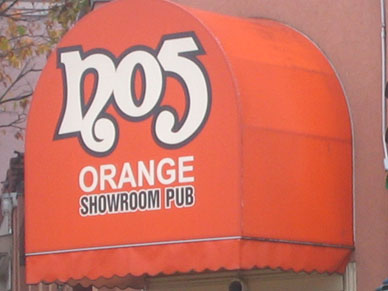 Eating lunch with someones crotch six inches from your face might not be your idea of a good time, but if the food is good, it certainly has the potential to be mine. The strip bar lunch is a staple of the blue collar lifestyle, and where there are blue collars, you can usually find manly fare at affordable prices. With this in mind, a visit to the No. 5 Orange Showroom Pub (205 Main Street) was not only necessary, but required.

Taking advice from the marquee sign out front, “Your day starts here with ice cold beer”, I found myself outside the No. 5 Orange willing to step into the seedy darkness of a gentleman’s club for my first meal of the day. Done properly, this venture would have to exploit the full potential of crassness such an opportunity presented itself with: I would sit as close as legally possible to the entertainment. I would gratuitously stare at the women on stage
while eating my lunch. I would even take a massage if it were offered. A lap dance, however, was not within my budget, so some restraint would have to be exercised.

The stage was equipped with a reflective ceiling, some kind of faux bathing area (don’t ask), various poles for acrobatics, a lit up ladder for sexy entrances from the dressing room above, and, of course, stools that surround the perimeter of the elevated floor. They have all kinds of names for the seating area that lines the stage of a strip joint, the one I always heard was “Sniffers Row.” Sniffers Row hardly seemed like an ideal place for proper dining, but a split decision I had to make on my seating choice found me at eye level to the stage floor, and past the point of no return.

The menu, with its sandwiches, fries and salads, seemed void of a lunch special, and even worse, mashed potatoes. Perhaps it was too much to expect for a Saturday afternoon, but this forced me to cast a suspicious glance at the clientelle seated about the No. 5. Most of the patrons were alone, and too immersed in the show to care about food quality. There wasn’t a Hydro or phone utility uniform in sight, which immediately tipped me off that I was not in for the meat and potato fantasy that I had envisioned for myself. I decided on the usual clubhouse sandwich with French fries instead, but before I could put ketchup on the side of my plate I was approached by another woman who was carrying a small tray of moisturizers, “would you like a massage sir?” Well of course I did!

Imagine if you will, your Food and Drink critic seated in Sniffers Row, receiving a massage from a large woman in a short acid wash skirt whilst eating a clubhouse sandwich, because this was the scene that was unfolding at the No.5 Orange Showroom. I devoured my lunch in mere minutes. “You should relax a little, you’re so tight,” my massuesse assessed out loud. The discomfort of the predicament I found myself in forced me to eat with an alarming urgency that shouldn’t be trusted, so let’s just say the food was good.

It would be unfair to go on without mentioning the entertainment being offered at the No. 5 Orange. I was treated to two shows while enjoying my massaged lunch. Both dancers —while exuding some pretty impressive pole work, and being able to dance reasonably well in 6 inch stiletto heals— seemed pretty disinterested in what they were doing. Each spent at least one song of their routine mostly standing or sitting around talking to the obvious regulars at the end of the stage. They were freaks in their own right, backing up a hi-five with, “yeah baby! Show us that ass!” one minute, and making retarded small talk to the half nude dancer the next. The second act spent most of her time talking to a woman sitting in her underwear at the side of the stage with some old dude.

All this tawdry behavior was too much after awhile and I quickly found myself in the harsh light of day on Main Street. I couldn’t have been inside the No. 5 for more than a half hour, which was really all that was needed to assess that the food, while tasty enough, was about as exciting as watching a woman with no
clothes on talk to a bunch of creeps who, by virtue of the amount of time they probably spend there, own real estate at Sniffers Row. Maybe I should give the place another chance; next time I’ll get the onion rings, and save up for a lap dance.