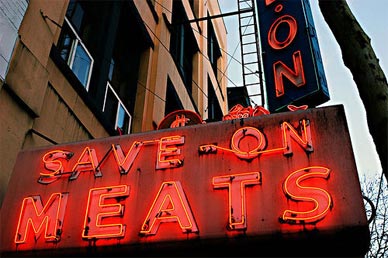 Save-On Meats (43 W Hastings St.) has got to be the biggest full service butcher in the city. Unabashed by the tongues, legs, thighs, butts, rumps and roasts all over the place, it operates like a mecca of death for the meat eater. I lived on their five dollar rib-eye steaks all summer long, and with each pre-BBQ visit, I would remind myself that an appointment with the yellow awninged lunch counter at the back had to be a mandatory autumn event. Rumors about the enormity of their one pound burger eventually led to me standing under the East Side grocery store’s neon-pig-marquee with a bravado generally reserved for Sunday dinner in a suit. The sandwich board sign from the bar next door, Funky Winkerbean’s Pub (sluttily advertising $1.50 glasses of beer) didn’t go unnoticed either. So I knew I was in for a potential overdose of exorbitant portions and low prices served in a unique and possibly vile environment. Nothing could excite this food and drink critic more.

The proximity of the seating at the Save-On Meats Coffee Shop is, well, let’s call it intimate. The U shaped counters put you face to face with some of the East Side’s finest. Whether it’s single occupancy hotel dwellers, homeless people who have scraped together enough change to get a coffee or snot nosed journalists looking for an experience, everyone is happy, it seems, when food is in abundance. I found the atmosphere at the rear of Save-On jovial. The guy sitting across from me seemed borderline ecstatic as he proceeded to pour an entire cup of sugar all over his french fries, devouring them before I even had a chance to order a Coke. Everyone seemed to know each other and would nod in recognition or shout salutations across the yellow counters.

The menu is very simple, and incredibly cheap. Burgers, toasted sandwiches, the obligatory all day breakfast and Chow Mein – that’s it. I opted for the cheeseburger. With drink, my entire meal came to just under $6.00, tax and tip included. The burger was double-pattied, had bacon, lettuce, tomato, onion, and came with a ton of fries. It was near impossible to finish. Seeing me laboring
through the last few bites must have been too much for the woman that approached me, doing the meth shake while blurting out “are you going to finish that or what!?” Before I could even react she was quickly escorted out the door. It gave me that last little bit of appreciation for what I had just experienced; one of the cheapest, and best burgers in the city. I dedicated the last few fries to her.

Sure, food brings people together, but nothing creates a sense of community like the drink. This was apparent not five minutes after I sat down inside Funky Winkerbean’s Pub (35 W Hastings St.), just after my visit to Save-On Meats. I was half way through my first bottle of Kokanee when I could hear a woman screaming behind me, “get the fuck away from me! I don’t even know who the fuck
you are!” as a very large man in sweatpants ran sheepishly up the main isle, and out the door.

I had walked past Winkberbean’s several times throughout the summer and found that the sunlight always shrouded the interior in an ominous obscurity that, mixed with the unsavory looking characters smoking out front, was all that was needed to create an intimidating scene. I was actually pretty disappointed by the appearance of Funky Winkerbean’s when I finally did walk in. It was surprisingly clean, and the red walls with the half nude flapper girls that adorned them helped to create a kind of calculated aesthetic. Still, the collection of old men and women who looked like men quietly contemplating their golden fluids like crystal balls revealing an unfruitful past, mixed with AC/DC and The Tragically Hip on heavy rotation, gave away the fact that Funky’s was indeed a dive bar.

Six or seven bottles into act two of my Save-On/Funky Winkerbean’s evening, our sweat-panted hero made a return appearance. He was clearly drunk – the kind of drunk that had his head cocked back onto his shoulders with his eyes closed to the ceiling one minute, and over-enthusiastically pumping his fist and yelling out the lyrics to AC/DC’s “Have A Drink On Me” the next. His presence was gigantic and dangerously unpredictable. He started maneuvering about the room, stopping at various tables to high-five everyone. At one point he completely missed his target and went down face first into a table of empty draft glasses. I left shortly after that with a decent drunk on that couldn’t have cost more than $20.00, and a mandate to find something slightly dirtier in the future.

The zero block of West Hastings Street and its immediate surroundings formed the social and economic center of Vancouver for decades. The area’s steady decline has been well documented, but what of the businesses that are still legitimately operating here? My visit to Save-On Meats and Funky Winkerbean’s Pub left me with a ground-beef induced, beer soaked feeling that while the clientele has certainly changed, there still is a community, and it revolves around other things than rock cocaine and crystal meth. It’s in our most basic necessities: Food, drink, and a drunken high-five sent crashing to the floor.