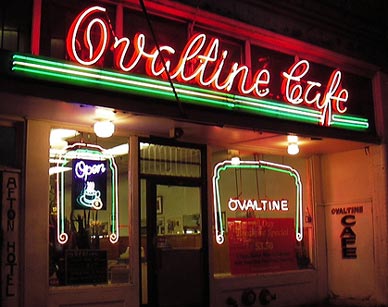 It took two separate visits for me to fully comprehend what the hell is going on with the Ovaltine Cafe (235 E. Hastings St.). The environment is so loaded with history and nostalgia that perhaps I expected too much from it. One Sunday morning, I ate three dollar eggs served with tomato juice in the company of blue collared workers fashioned with stiff haircuts. Two weeks later, I went back for a Saturday night dinner of clubhouse sandwiches and cheap domestic beer. This visit was anything but uneventful, and eventually ended with deplorable behavior, vomit, and a broken heart over what was and will never be again.

The Ovaltine is huge, beautiful, impressive, usually empty and under appreciated. A glass cabinet–originally designed to display items of daily deliciousness–runs the length of the room, and is stuffed with a confusing array of knick knacks. It also has a really shitty and barely audible AM radio slobbering all over it. There are condiment containers on the tables made up from emptied out juice containers, and hot sauce bottles with holes punched in the top. The women’s washroom is permanently out of order, and it’s unlikely that either functioning toilet ever accommodates “Ladies,” or “Gentlemen,” as the sign suggests. At least the disinterest keeps the bathroom graffiti intact, which makes for an entertaining read. My favorite, “Beckett was a sham!!!” is scribbled in black marker just above the toilet. 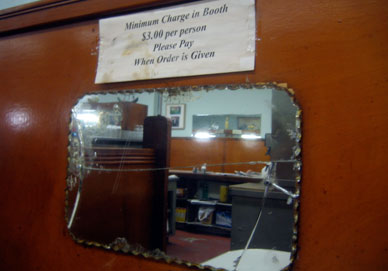 Still, the Ovaltine is able to shine through all the mediocrity it’s been handed over the years. The neon out front is some of the finest the city has to offer. Inside, a twenty foot ceiling towers over a long, stooled lunch counter with a double barreled row of high backed booths that allow a view of seated patrons from the forehead up. The place is coated with the most wonderful shade of brown wood, originally installed when the Ovaltine was built in 1943. The whole room creaks like an old ship if anyone moves.

Options like cabbage rolls, steaks in various forms, pork chops, open face sandwiches with gravy and an all day breakfast had me gripping my fork when I first visited the Ovaltine. I was so elated to see $10 pitchers of draft on the menu that, had it not been so early, I would have ordered one. I opted for the breakfast special, and it was certainly worth my $3.50. What I would like to mention instead are the pancakes. As noted on the menu, you can order them stacked as high as you please. I didn’t want to get too high, so I just ordered a stack of three. With my sobering height of pancake, and coffee instead of beer, breakfast idled along like any other lazy Sunday meal.

I wanted more though. A return visit was required. This time I would treat the Ovaltine Cafe with the respect of a fine restaurant, ready for it to deliver the magic I knew it was capable of. I went on a Saturday evening, invited a date, and dressed up for the occasion. But while my Clubhouse Sandwich was filled with an ample amount of turkey and served on the most perfect white plate, everything else was disaster. For starters, $10.00 pitchers no longer exist and I was forced to plow myself with $3.00 bottles of Canadian since the rest of my party was late. When she finally arrived I was quite drunk, and fully engrossed in an argument between a couple, three booths up. “What do you think you are, a $100.00 a night whore?” he complained, while she worked him for dinner as if they did this every night. My guest seemed thoroughly unimpressed, and ordered a bowl of soup. The evening ended with yours truly losing his keys, inviting himself back to his date’s apartment, drinking her scotch, and finally, barfing in her sink. I haven’t heard from her since.

I don’t know exactly what I was looking for inside the Ovaltine Cafe, but a feeling of emptiness surrounds time there. I would like to see it full of people, vibrant and loud. Instead it seems on its last legs, resigned to the reality that it’s patrons couldn’t give a fuck about its appearance as long as the food is cheap and hot. It’s all about in and out necessity dining, and the Ovaltine was never designed for that. It’s unlikely the current owners really appreciate this gem of a time machine they have in their possession, but at least somebody is keeping the neon going and the doors open so we can all chase the past just a little bit longer… but I don’t think I’ll be back anytime soon.