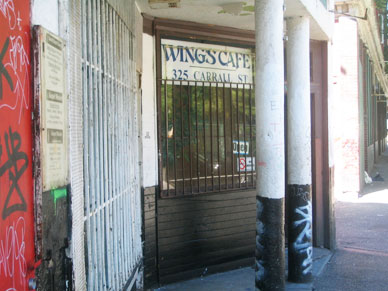 I come here to be depressed

It’s pretty hard to notice anything that shares a block with the piss-soaked alley beside the old Brickyard pub and the always appetizing Pigeon Park. But one afternoon the door to Wing’s Cafe (325 Carrall Street) was propped open, revealing, much to my horror, a functioning restaurant. I was certain that the fellow sleeping under an umbrella out front was daring me to eat there, so the challenge was on.

The beige faux wood counter forces diners to contemplate a collection of signs scolding them for a multitude of infractions including “No shirt, no service!” “No free food!” “No change!” “No asking for money!” All followed by the obligatory, “Have a nice day!” This wall, the focal point of the cafe, also held a menu made of hand-made neon posters, beautifully contrasting all that beige. There was no music playing because Wing’s obvious proprietor, let’s call him Wing, seemed to have his own beat going on via some kind of small hand held audio device that trailed a thin wire into his left ear. It should also be mentioned that Wing’s Cafe has an awesome collection of Madonna magnets on the fridge behind the counter. 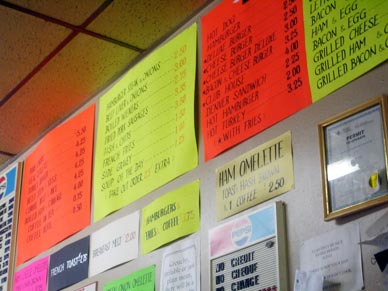 The silence was soon broken when another guy sat down two seats away, ordered a coffee, and began a monologue towards Wing’s wing man, who had been keeping busy tidying things behind the counter. It started with “I come here to be depressed,” and ended with, “Shit man, you’re looking good. Got a good job, doing well, damn! You’re looking good.” It was pretty obvious that Wing Man, holding a zip lock bag filled with cigarette butts didn’t quite agree with the assessment of the new guest. “Don’t you fucking pull my leg,” he responded before leaving the cafe to smoke.

If I had any balls, I would have ordered the pork chops for $5.50. Pork chops! Just the words themselves elicit a certain greasy bravado over the fickleness of the dining experience these days. I was so tempted to feast in wanton excess under the dullness of Wing’s florescent lights, but once I caught a glimpse of a twenty pound turkey half carved and sitting out in the summer heat of the back kitchen, I just couldn’t do it. Instead, I played it safe with a grilled cheese and fries. It was pancake thin, made of the cheapest bread and cheese, and was served on a plain white plate with McCain krinkle cut fries. The fries were nostalgically good, but this was comfort food gone wrong. Not even a fridge magnet of True Blue-era Madonna could inject the dish with flavor. But that’s what you get for playing it safe. I doused it in a sea of ketchup and finished it all.

Serving affordable food in the DTES isn’t exactly the most rewarding career path. and really, neither is eating it. But Wing’s provides the locals with cheap food, employment, and a place to be depressed. Something that should not only be commended, but celebrated with a visit. If you’re not a pussy like me, drop by and have some of that turkey, or some pork chops even. I’m not about to drool onto the concrete under an umbrella to do so, but I still dare you to eat there.