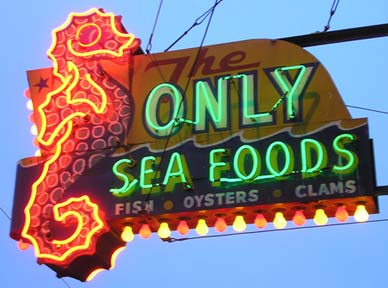 fuck everyone, yeah that means you

The Only Sea Foods Cafe (20 E. Hastings Street) has occupied the same block in the downtown east side for over 90 years. Its history runs deep through many generations in Vancouver, but no one knows much about it except that their grandma ate there.

Standing in the entrance under the instantly recognizable sign that features the adorable Only the Seahorse, I noticed that you’d be hard pressed to find a restaurant as coated in the word “fuck” as the Only Sea Foods Cafe is. And not just with marker or spray paint—screw that urban shit. This was hand-scratched park bench style. There was “fuck” to my left, the usual “fuck you” over by the pay phone, and my favorite, “fuck everyone, yeah that means you” scratched right into the painted window beside the door.

Inside, the ceilings are uncommonly tall and the massive mirrors that stretch across two of its white tiled walls make the little room seem much bigger than it is. Interiors like this don’t exist anymore; they’re often attempted, but it’s always ruined by the bullshit of pretension. The Only Sea Foods Cafe is the real deal. Seventeen swivel chairs around two horseshoe counters and a couple of booths in the back are all the seating you’ll find. There is no music, television and no washroom.

Weird nautical-themed knick-knacks line the shelves above the exposed kitchen and the chef quietly stares into the dark pool of the deep fryer. A small Asian woman keeps tabs on everyone coming in and out of the restaurant. And everyone but me went straight to the back room. The Only seems to have adapted throughout the years to suit the needs of its neighborhood. From a middle class evening destination, a working class lunch cafe, a late night hang out to a mostly empty diner (and from what I could tell, a source for rock cocaine). Except for two people that came in to buy a pop, I was the only one of a steady stream of people that was actually going to be eating anything. 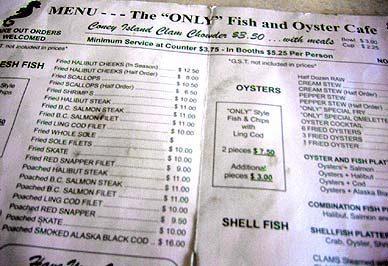 Even though the menu offers every kind of seafood imaginable, straight up fish and chips seemed to be the safest bet for a first visit. I had the salmon for $7.95. My meal started with a half loaf of fresh bread served with butter. The salmon soon followed. Two pieces in cocoons of golden batter, wet from the grease it had just been cooked in, served on a bed of chips with white packets of no-name mayo. I ate everything in silence and listened to the drama wafting in from the street through the louvered window high above the entrance.

The general consensus on the Only Seafood Cafe is that it’s a dive. And walking up Carrall Street afterwards, I did have a moment where I thought that I might shit my pants. My sense of adventure for unique dining experiences has left me poisoned on more than one occasion, so a bout of paranoia about the fact that I just ate seafood in one of the dirtiest neighborhoods in North America was warranted. But that was some tasty, greasy, fish and chips. And I seriously doubt that the Only is any dirtier than your average White Spot. So fill one of those booths with some choice friends and order a round of lobsters for the price of a double double or whatever the hell it’s called. Or go it alone, you’ll be dining with history as your companion. A formidable date, at least until it’s inevitably bulldozed and forgotten about because it’s covered with “fuck”.