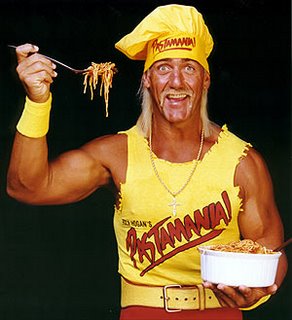 After the existential and fantastical The Fountain, director Darren Aronofsky has pulled in the reins and gone back to basics. He unearthed one of Hollywood’s favourite fallouts, Mickey Rourke, the perfect choice to play Randy the Ram; a beat-up, past his prime-pro-wrestler, down on his luck who has just suffered a heart-attack and in his effort to re-evaluate his life, seeks to repair his damaged relationship with his estranged daughter. Rourke, with his swollen face and muscular build gives a touching and personal performance in what feels like more like a documentary than a Hollywood blockbuster. And that’s not that surprising considering Aronofsky and crew shot the film in real small-town arenas and feature actual small-circuit wrestlers and fans. There is a natural beat down vibe to the whole thing as we watch a man, struggling to face his imminent mortality and reclaim some shadow of his former glory face constant personal failure. And that got us to thinking…

There may be more documentary than you might think in The Wrestler. This actual documentary by self confessed longtime wrestling fan Barry Blaustein takes a fans look behind the curtain in the former World Wrestling Federation. It features interviews with WWF’s Vince McMahon and profiles up and coming wrestlers and there’s some great stuff about Mankind aka the world’s nicest giant crazy wrestler dad and his bouts against Hollywood pretty boy, Dwayne “The Rock” Johnson. Awesome. But the best part of this doc is when Barry tracks down former WWF icon, Jake “the Snake” Roberts. You know the guy who back in the 80’s and early 90s would pull out a boa constrictor on his defeated opponents? Well Jake’s drop form the top hasn’t been too kind. He’s getting old, his elbow is shot and he’s got a crack habit. He now wrestles on the small-town circuit, getting by on his reputation as one of the greats. He also has an estranged daughter he tries to reconnect with. Just like in The Wrestler, except for the crack. There is no crack in The Wrestler. That’s too depressing, even for the movies. Thank goodness.

While it might seem a big jump but we kind of see punk rock as a form of wrestling. Sure a good part of it is performance, but if you do it right, the body takes some serious punishment. We like this movie. It’s dirty and wild, and smartly directed and maybe one of the best music movie biopics about a band that wasn’t real. There’s spit and blood, booze and smokes galore but it’s ultimately a collectively personal tragedy. A one-time punk band, trying to not live in the shadows of it’s past gives it one last shot and get back together and tour. It doesn’t work out that well.

This seemed, after Beyond The Mat, to be a natural to re-watch. An initially we were like “yeah ex-boxer Jake LaMotta is a tragic character, just like Randy the Ram.” But there are as many real differences between the two films that it’s almost fair to say that beyond the beaten-up central character these two movies hold little in common. For one the aesthetics between the two couldn’t be more different. Where Scorcese creates iconic moments and composes shots with classical and timeless skill, Aronofsky takes to the grainy hand-held of on-the-fly documentary filmmaking. From it’s black and white cinematography to the convincing boxing scenes with it’s careful framing and artful execution, Raging Bull is dedicated to telling a story. The Wrestler on the other hand is showing us one. It is intimate, immediate and lonely. There are no sweeping cameras to drive or create emotion, only actors inhabiting a world. In terms of character, while both men are beaten down, it is difficult to find much sympathy in LaMotta; he is mean, violent and paranoid. But Rourke’s Randy the Ram is much more sensitive and there is a humanity in Randy that is more accesible or upfront, something that is more complicated and brutal in Deniro’s LaMotta, if not in the man himself.

Another boxing as “tough way to make a living” parallel to wrestling, this gritty little drama mirrors many of the same moments of fate that behold all of those who find themselves at a crossroads where their glory days are behind them and the future looks bleak and lonely. Here Stacy Keach plays Tully, an aging, small-time boxer who’s looking for a second chance, any where he can get it. He finds a kid who shows some promise (Jeff Bridges), and thinks he has helped the up-and-comer by giving them a shot, but finds out later that the kid got a girl pregnant right away and has quit boxing. Next he tries to start up a relationship with a booze-hound he meets in a dive-y bar one afternoon and she proves to be another in a lifelong series of bad decisions.

Before it was the World Wrestling Entertainment, there was a time where professional wrestling maintained some sense of magic realism. People wanted to play along even though they new it was spectacle; large, loud theatre. Throughout the 1980s the World Wrestling Federation set arena attendance records across the United States and saw the rise of people like Hulk Hogan, Randy “The Macho Man” Savage, Andre The Giant and Jake “The Snake” Roberts all mixing it up for a rabid public. This was when the McMahon family took wrestling from the small-town circuit into the super event arena and made millions doing it. Hulkamania was running wild and in this classic Wrestlemania, the two heavyweights, Hogan and The Giant square off for the title match…and is it something to see. A classic match where the Hulkster picks up and body slams the 500 pound Giant for the win, this was a good time for professional wrestling. The characters were comic book; a mass of lumbering muscle men bouncing of the ropes and laying chops about the heads and shoulders. It was still innocent and Jesse Ventura had yet to enter politics…Yes, some generations are better than others.