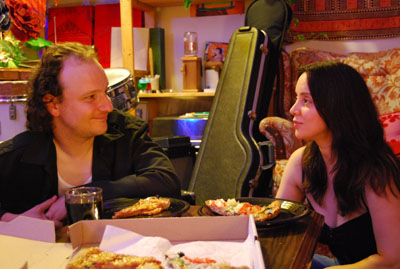 Tom Scholte made it “big” in the late 90s in Bruce Sweeney’s film Dirty, or at least “we” loved him in that. In fact we think Tom is a one of favourite local actors. But what’s this now? His directorial debut? Great! And what’s this? It’s a Canadian contribution to the Dogme 95 film aesthetic? Wow. We thought that was well over. But so what. Scholte’s Crime is a multi-verse story with intersecting stories that are both honest and well told. And the decision to go Dogme really works. It eliminates the melodrama and replaces it with real drama to the point that you really feel like you might know these people. and that for a movie like this, is a good thing.


ONLY BONUS PICK: Filth and Wisdom

Ok so as we get down to it this is a pure pop culture curiosity. Madonna’s directorial debut. Featuring that quirky eastern European guy from Everything Is Illuminated, the VIFF write-up charges that she is an even better filmmaker than the self proclaimed anti-miserablist Mike Leigh. Well…that’s a pretty big claim. But it did peak our interest. Has her time in England bumping uglies with her flash-in-the-pan rock star of a filmmaker husband given her some insight and talent? We will see. Tonight we dare Madonna’s movie to be good…we dare it you hear!