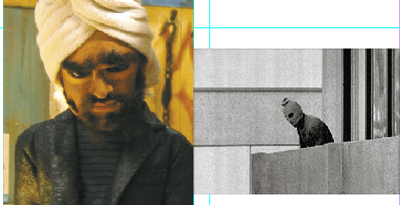 As political, economic and cultural inequality displaces greater and greater numbers of people, the repercussions of this instability increase to the point where individuals, organizations and political factions become desperate to find effective methods to voice their opinions and frustrations. We only need to look at the effects of 9/11 where the actions of Al-Queda instantly focused the world’s attention to their agenda.

It seems only natural that such provocative events would find their way into cinema, a seductively cool medium that reaches the most people. Like with acts of terrorism that manipulate through fear, cinema itself is highly manipulative of people’s base emotions, capable of affecting audiences’ opinions and ideas. Both are spectacles unto themselves; one of the biggest examples of the film as spectacle used as a tool of manipulation is Leni Riefenstahl’s Nazi-commissioned Triumph of the Will (1935), a masterpiece of propaganda for the largest act of terrorism of the 20th century. Even though cinema can assist in understanding the motivation of such acts, regardless of its biases, an audience must still be aware that a film is an artifact of its own time. What makes a film great is its ability to offer a lasting political perspective beyond its release date.

In a recent Vanity Fair there is an article that chronicles the scandals and failings of Bush’s White House. In the article it is mentioned that when the administration began post 911 operations in Iraq, experts on the Middle East were convinced that politicians in Washington were watching the movie Patton when in reality they should have been watching The Battle of Algiers, one of the most authentic and realistic re-enactments of an urban guerilla terrorist campaign to date. Director Gillo Pontecorvo’s 1965 film is about the Algerian struggle for independence from France. It explores the violent political struggle of the Algerian Front de Liberation National as they engage in a systematic and bloody guerilla attack on those it sees as its enemies. The recreation of exploding restaurants and the gruesome consequences of these actions remain as haunting reminders of the powerful resolve that emanates from the hearts of any people struggling to fight for their independence.

While it can be difficult to identify with those who seem prepared to kill others and often themselves under the flag of liberation, it’s necessary to watch and listen to the cries of those who fight for recognition, and failure to do so is both foolish and dangerous. Director Kevin McDonald’s (not of Kids in the Hall) 1999 film One Day In September is a shocking documentary that retraces and chronicles the tragic events of the Palestinian hostage taking of Israeli athletes in the 1972 Olympics in Munich. Featuring the first and only recorded interview with Jamil Al Gashey, the only surviving member of Black September, the film manages to cover ground usually untouched in these kinds of films. Compiled of actual TV news coverage and still photographs, this documentary examines the political origins and aims of the Palestinian group as they grabbed the world’s attention. Uniquely positioned, the film also conveys the tragic personal horrors inflicted by the hostage taking.

Despite the graphic images, the most fascinating aspect of the film is the way it explores the failings and naÃ¯vetÃ© of the German officials in response to the attack. They continually failed to correctly assess the situation which ultimately led to the final shoot-out and killing of all nine remaining hostages, one policeman, and five out of eight terrorists. The film concludes, with the support of interviews, that the German government, embarrassed with their disorganization, days later, silently facilitated the exchange of the remaining terrorists for the promise of no future attacks on German soil.

Steven Spielberg’s new film Munich opens here, as we are rushed through the chilling and violent events of that one day in September, and as the helicopters explode, Spielberg moves us to Israel–the headquarters of the elite Israeli intelligence agency, the Mossad. There, special operative Avner Kauffman is enlisted to carry out a dangerous mission of revenge that will take him and his ‘hits quad’ to Europe to eliminate eleven Palestinian targets charged with orchestrating the Munich killings. There has already been controversy surrounding the film, as it presents the brutal nature of the assassinations in no uncertain terms. While the story of the film concerns the mission, the moral heart of the film is surprisingly difficult; this is especially surprising coming from a populist filmmaker like Spielberg.

Navigating gritty territory, Munich manages to present the ambiguous and dangerous morality of political retribution. While the discussion of the roots and causes of the conflict between Israel and Palestine are inescapable and obligatory, Spielberg manages to give voice to both sides involved–with Kauffman at one point even having an emotional conversation with a Palestinian operative he will later kill. The film ultimately focuses on the struggle faced by Kauffman as he comes to believe that there are no simple answers to be found in the continual blood letting. Caught between a sense of loyalty to his country and his people, his original motivation is to inflict a brutal justice on those he sees as responsible for the violent and heartless murder of his fellow Israelis. As the film progresses, Kauffman begins to realize the complicated nature of the world he inhabits, and slowly his conscience begins to question the personal value of his actions.

The Terrorist (1999) from Indian director Santosh Sivan (Bride and Prejudice) and The Assassination of Richard Nixon (2004) by Niels Mueller are both films about the personal, and directly emotional relationship that the individual activist faces. With minimal plot and dialogue, The Terrorist, based on the real-life assassination of Indian politician Ravij Gandhi, is a look at the deep personal conflict encountered by a teen-aged female member of the Sri Lankan Tamil Tigers assigned a suicide-bombing mission. The film depicts her as an individual who can make her own decisions, yet as someone whose convictions are shaped by those she respects–mainly her superiors in her militant group who never even mention the possibility of one of them going in her place. While The Terrorist comes from a section of the world (mainly Asia and all the surrounding continents) considered by North Americans to be the source of terrorism, The Assassination of Richard Nixon is about a regular American. Serving as a precursor to Timothy McVeigh the film is based on a real event involving Samuel Byck. After suffering some hard-times, including his divorce and alienation from his brother, Byck begins to believe, in his depression, that the president is to blame. This man is a loner, and as the film progresses we see how he manipulates his own convictions and actions by filtering his surroundings through his depression and social awkwardness.

Both films bring an element of humanity to the type of person so often stereotyped as a mindless killer or religious fanatic willing to sacrifice life for an invisible cause.
The collective perspectives of these films reflect the frustrations and desperation experienced by those who suffer from a form of neglect. The reasoning behind so many of these acts of brutal violence is fundamentally related to the experience of being frustrated and voiceless. What these films achieve is that they — like the acts of horror themselves — reach large audiences and offer a space to document, re-create and explore the imbalances and inequalities that lead desperate people to commit desperate acts.