Iron Man: Gay In More Ways Than One 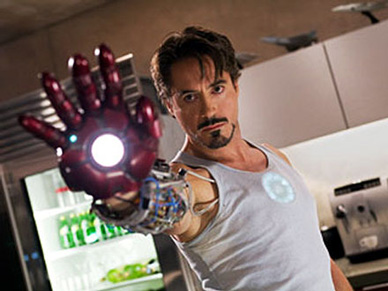 So here’s the funny thing about Iron Man… Isn’t Robert Downey Jr. gay? No big deal if he isn’t, but we just always assumed, you know? There was the Elton John video, the drug addiction, the effeminate way he has with words, the talking about his dream to Mike Tyson in Black and White, the sleeping with Tobey Maguire in Wonder Boys. It all just screams “gay!” And now here he is in Iron Man, the first allegedly (by us) gay man playing what may well be the first gay superhero. Sure, there have been lots of “gay” superheros before, and really, the argument could be made that every superhero ever is gay. But since we’re talking about Iron Man, we’ll break it down for you.

To start with, every gay man in the world must be sweating the shit out of that goatee RDJ is sporting in this thing. Angularly trimmed to the utmost precision, the only way it could get gayer is if “Free Mustache Rides” were neatly shaven directly onto the mustache (which is one of those half mustache, John Waters top lippers, btw). Then there’s the way he fucks. It is immediately established that Tony Stark is a womanizer. He apparently fucked every single Maxim cover girl last year (which, if true, would mean he slept with Lindsay Lohan, which would mean he’s got gonorrhea, which ups the gay factor substantially). But then they actually show him fucking. Nothing graphic, but instead the most pathetic, first time in a vagine doing it you could ever imagine. Really weird kissing, and strange, awkward thrusting, and then they fall out of bed. Pretty gay.

But the analogies get more serious as the movie keeps going. Tony Stark gets kidnapped by terrorists and goes into a cave (closet) for a few months to build them a special bomb, but then he tricks them and “comes out” as the Iron Man. He then decides to stop being a weapons maker, which was obviously his “seriously, I’m not gay” cover, and decides to be a humanitarian. Are you seeing the Polaroid develop? No? Well, we’ll shake it a few more times for you.

The dual nature of being a masked superhero – of having a “hidden” identity – is at the very heart of any character that has peeled on some hot looking tights and fought against the evils of patriarchal society. The concept that most heroes, like gay people, have for so long felt required to wear a mask to hide their true selves is pretty easy to grasp. Iron Man, ironically, makes his suit not just to hide his identity, but rather to be able to escape the confines that his masculine, military industrial persona has trapped him in. It is a world of hyper male violence, of trading missiles and guns (aka penises) to terrorists. So his metal suit protects him from this violent world, yet thrusts him into it, allowing him to flap his wings like the peacock he truly is in the gay parade he never got to march in.

So is Robert Downey Jr. really the first gay man playing the first gay superhero? Find out for yourself. Unless you’re a serious ‘mo-phobe, the movie is pretty fun… but not nearly as much fun as the Sex and the City movie is going to be!