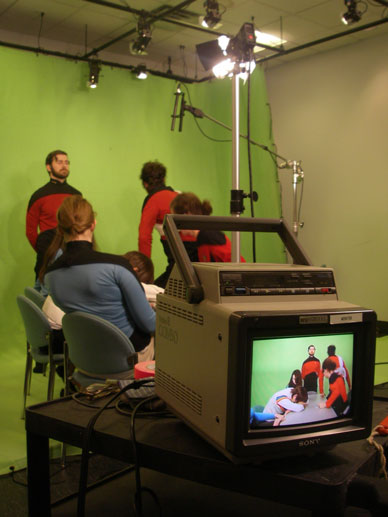 The Next, Next Generation

Everyone knows one. That person who’s totally into science fiction. Be it Star Wars or Star Trek or even Battlestar Galactica, if it’s got star in the name it’s probably got a convention and some serious fans. While most of these, “fans”, are just happy to dress up once a year, meet up with other oddballs like themselves and mingle with a few cast members of their favourite star show, there is also a singularly different type of fan, one that goes that extra light year. These are the ones who actually try and make something, on their own, inspired by something they love. While a lot has been written lately about people doing remakes and spoofs , what a group of guys from Vancouver have done is to write and shoot an entirely original episode of their favourite Star Trek series The Next Generation. Born from ideas tossed around in a basement, they recruited friends and family as cast and crew and using a singular green screen mounted in a classroom at SFU, super fans turned filmmakers Derek Howard, Racan Souiedan, Sam Scott, Jamie Quast, Graham Houston, Darren Bot and John Rogers have just put the finishing digital touches on their contribution to the Star Trek cannon with Chains of Betrayal. It’s premier screening is April 30th at Only’s favourite screening venue in Vancouver, The Astoria. Recently, I spoke to Derek Howard and Racan Souiedan about the whole idea.

ONLY: Ok, so why The Next Generation?

Derek Howard: Basically Next Generation was the series our generation grew up with, and Racan and I were roomates and I had all the DVD’s so we would watch them and we kind of bonded over that. And for us these characters had become larger than life in our minds.

Racan Souiedan: It was also definitely the first series that I can remember, looking forward to new episodes as a child, even to the point that my parents enjoyed it as well. I can’t really say that about the other series.

DH: Yeah that was the one you were watching week to week, wondering what’s next, what’s next.

ONLY: Next Generation definitely had a more scientific edge to it as compared to the original series. It seemed more prepared to go and ask those questions like “How does time travel work”. Years ago there was one of the writers on this call in radio show, and so I called in and asked him this question that had been nagging me. “Why do you have the transporter rooms if people can be transported from anywhere, without having to go to the transporter rooms?”

ONLY: I was hoping for some kind of scientifically rational reason, and he didn’t have a really good answer.

RS: Especially if you have scenes like when Picard is beamed directly off the bridge for no reason.

DH: You’d expect him to say that its for certain emergencies, but if not then why not do that every time?

ONLY: Yeah I would accept it if it was some form of protocol and only if there is a desperate situation do they decide that they are going to risk it and hope Picard gets off the bridge safely.

DH: Actually in the original series it was more of a risk and they refer to…

ONLY: So how long is Chains of Betrayal?

DH: The script was 46 pages long, so a full episode length, but we ended up with about 35 minutes.

ONLY: I haven’t seen the whole thing, but it seems like the premise is something like Picard has gone missing and Riker has stepped up as Captain…

RS: So, in the teaser trailer Picard is missing and Riker places some of the blame on Wesley and the crew and starts an investigation. So the episode takes place right after “Unification”, where Leonard Nimoy makes an appearance. Because of the fact that Spock has mind-melded with Captain Picard, they think that he is the more appropriate candidate to lead the investigation so he returns to the Enterprise and Riker feels like his authority has been undermined.

ONLY: And then there are some Romulans?

DH: They get in to the fold eventually. But as Spock investigates he involves all of the senior staff and starts digging through their logs, suspicious that Picard’s disappearence is more along the lines of a conspiracy. Then things get a little bit hectic, and then the Romulans get involved and the Klingons and it’s bad news from there.

ONLY: There’s obviously a fondness and a love for the show, but there is also some aspect of comedy. You guys aren’t taking it all too seriously.

DH: Definitely, if you could have seen us on set, it was pretty hysterical. I mean we shot it all over four days in a classroom up at SFU with a green screen hanging from the wall and used all of our close friends, while trying to fit them into roles that would kind of suit them. Like Racan here kind of looks like Spock and I do a decent Brent Spiner (Data), but we didn’t want it to be too campy, like there’s a lot of fan fiction that takes it too far, especially in sexual directions and we really tried to keep ourselves in check when it came to that kind of content.

RS: I think we definitely wanted to focus on creating a good script that represented our favourite elements of the show like “away missions”, “space battles”, “conspiracies within the Federation”…