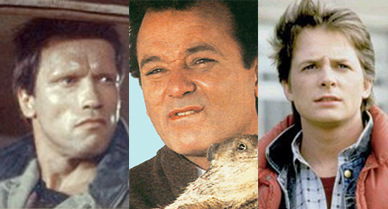 When we initially decided to devote an entire week to exploring the marvels of time travel, our first mission was to make a definitive list of every movie ever made regarding the subject. Since most of us have learned everything we know about time travel through film, this seemed like the only place to start. But yeah, we got Back to the Future and The Terminator down on the list, and then someone suggested Groundhog Day… Groundhog Day? Is that really a time travel movie? It’s not really about time travel, but he does technically go back in time, time and again. Before we went any further we decided to do some internetting, and thank God we had the foresight. Predictably, somebody already made a seriously comprehensive list of time travel films, and even went as far as classifying them into sub-genres.

Andy’s Anachronisms, which, according to (we assume) Andy, is “devoted to exploring the themes of time travel and alternate universes in books, film, television, and pop culture in general,” immediately rendered any semi-serious canon we might have fooled ourselves into thinking we could thoroughly amass completely worthless. He’s really done the legwork. For example, yes, Groundhog Day is in fact a time travel film, but Andy classifies it as a TP, or Temporal Phenomenon time travel film, one in which “temporal anomolies [sic] such as time loops and other story telling devices that involve some manipulation of time,” are predominant. The other sub-genres Andy has invented are Alternate Universe, Alternate History, Personal Alternate History, straight up Time Travel (the majority fit into this classification), Rip Van Winkle and Plot Device.

It’s a good thing we discovered Andy’s Anachronisms when we did, and not after a two hour stoned debate on what really constitutes a time travel film, potentially resulting in some ridiculous statement on time travel which, uncontextualized, hardly makes sense. For what it’s worth, we haven’t been able to think of a single film he hasn’t included on his list, and none of us would have ever found the energy to do anything remotely close to as thorough a job.