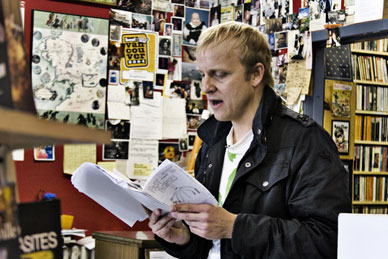 Kevin Spenst is a man of many words. So much so that about a year ago he self-published a book of short, short stories called Fast Fictions. It’s a cute little book, with a doodle on the cover. It was compiled from short stories he had been writing daily over the last three years. To celebrate, and shamelessly promote the fact that he had actually written his one thousandth story, he rode around town following a schedule and map and did 50 readings at various locations through out the city. Conveniently, a camera crew followed him and they have just finished putting together a really pretty, short documentary about the whole thing. But more than just a document of the event, it is a look into the heart of a man whose dedication to his art is pretty monumental, and it captures his love and desire to be a recognized writer.

ONLY: So how’d you get involved in the whole mad project?

Jeremy Schaulin-Rioux: A friend of mine from high school, maybe you know him, Cam Reed?

ONLY: Yeah I know him.

J.S.R: Well he said this guy, Kevin Spenst had written a thousand short stories over the last couple of years, and he was going to do a one day, twenty-five at the time reading tour of the city and that he wanted someone with a Handycam just to document it. I thought it sounded really cool.

ONLY: Kevin you went around on your bike? You bike around town like a crazy man most of the time…

ONLY: Was this just a way to make it happen really fast?

ONLY: Do you do everything really fast?

K.S: Yeah! Yeah! I eat way too fast but not… I know what you’re thinking, don’t say it, I’ve fallen into your journalistic trap.

ONLY: You guys filmed a lot of the movie using a tandem bicycle? Why?

J.S.R: It just made sense that if Kevin was going to be on a bike, that we should be there too. Originally we wanted to put Brad in the back of a trailer, but there are no trailers in this city that hold anything bigger than a baby or a dog, so the next closest thing was a tandem.

K.S: They started out with Trevor on a skateboard.

J.S.R: And Hunter drove around in a van.

ONLY: So you had a skateboard, a bike and a van, and a man with a thousand stories.

K.S: What’s that movie about the cat and dog who have adventures?

K.S: Yeah! We were trying to recreate Incredible Journey but with different forms of transportation.

ONLY: You do some really pretty stuff in the film where drawings and words appear over top of the images. Whose idea was it to overlay the drawing and writing?

J.S.R: Kevin had shown me some of his original drawings, I call it doodle art, because you never redraw, it’s not sketch because it’s one shot, and we thought it was cool and kind of like a different version of Kevin’s personality. I used to do a lot of stop frame animation so I thought it would work really well. It took a lot of time but I think it turned out really cool.

ONLY: Was that the same for the stop motion sections where the pages are building into a pile?

J.S.R: Obviously, I wasn’t around when Kevin was writing the stories, and it’s something that I think kind of gets glossed over really easily, that he wrote a thousand stories. That’s a thousand stories, he’s writing everyday for years, so that was a way to reinforce that.

ONLY: And you wrote a story everyday for how long?

K.S: Officially, and this changes, but officially we’re saying three and a half years. But in the documentary I say four…it’s kind of complicated.

ONLY: So what’s the truth?

K.S: You can’t handle the truth.The truth is one year at a time with a two month break in between. But you can’t summarize that for people. They don’t have the attention span to listen to me explain how I did it for a year and then took two months off, and then did it again…it takes too much time. But it’s nice to have that everyday. It makes me feel like I’ve accomplished something everyday. And it’s fast, like the doodling, it’s just something that comes out in a rush. I’m curious Jeremy, if making the documentary was like that or if your approach was more refined, because for me everything is kind of like a stab in the dark.

J.S.R: You don’t edit much. I mean you edit as you write, but the editing of the movie was a lot of work. For a while we were struggling and beating up against it. We had a half hour version and a two minute version, until finally it kind of got knocked into shape. That was probably when we started to refine the idea that the story is not really about you getting through a day and making it to fifty readings, but more about “You want to be a writer” and what’s the journey of that. It starts of with you reading to people, and some are in to it, some aren’t and then later on you’re reading to anyone who will listen, until the end when you’re pulling people off the street, interrupting tour groups, because you really need to get the story out there.

ONLY: There is a kind of do or die mentality that comes across. Like you’re going to write no matter what, and you don’t care if anyone listens because you’ll make them. Like that girl at the bus stop at the beginning of the movie where you pull up and are basically like “Hey you’re lucky you’re here because I had a plan to read to someone at this bus stop.” What was the best spot you found to read in?

K.S: Well now, with six months distancing us I think it was when all the people scattered, fled the Starbuck’s patio on Hastings street. At the time I felt bad, like I was doing something wrong. But now it’s kind of funny. It was the fourth place on our list. They wouldn’t let me read inside so I became even more determined to read and figured they couldn’t do anything if I was on the sidewalk. So I stood there in front of the smoky front patio of Starbuck’s and I introduced myself. And when I presented all this to them, everyone on the patio just totally scattered. They all just looked at each other and left.

ONLY: Maybe because you had the camera?

J.S.R: We had three cameras.

K.S: Yeah but why would they be so frightened?

ONLY: They were probably all criminals.

ONLY: I certainly hope so. In fact that’s who I think most of our readers are.

One Thousand Stories is only 13 minutes short and premiers at The Paul and Ben Film Festival, March 28th @ Emily Carr Theatre on Granville Island. 7:30pm.