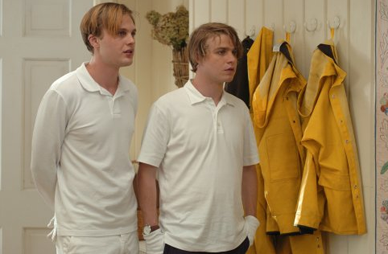 It’s kind of unusual that director Michael Haneke should re-do a film he has already done. I say re-do instead of re-make because his 2007, English language version of his 19997 film Funny Games is less a reworking and more a shot for shot duplicate, with Tim Roth, Naomi Watts and Michael Pitt in roles originally occupied by German actors. To Haneke, this makes sense. He claims he had no need to change anything because he got it right the first time and that the film, in his mind, was always intended for American audiences. It was just a matter of time.

The story is simple. A well-to-do family arrives at their country home for a vacation. Soon enough an uninvited guest arrives at the door. Dressed in tennis whites and sporting white gloves, he asks if he can borrow some eggs. The mother (Naomi Watts) agrees, lets him in, and so it begins. Soon enough the mother, father and son are captives in their own home, beaten down and forced to play a series of increasingly dangerous mind games for the enjoyment of their baby-faced captors. Sounds innocently depraved enough. But unlike the obvious nature of the Hollywood slasher, Funny Games steps outside of the singular nature of traditional horror and explicitly implicates us, even includes us, the viewer, in the violence we have agreed to sit through.

We are pawns in this constructed game and we come to realise this from the very beginning. In the opening sequence the gentle and serene image of a family driving to their cottage, set to the soothing sounds of classical music, is shattered by the title card paired with the screeching and almost nihilistic screams of John Zorn’s music. From there, like the arrival of this North American version, it is just a matter of time before things get nasty. Later, after the family has been thoroughly tortured and beaten, a demoralised Naomi Watts springs to life and snaps up a loaded rifle and fires a shot, killing one of the captors. The relief is invigorating and for a brief moment we feel vindicated, that possibly the tables have turned. But Haneke, famous for his quote: “film is twenty-four lies per second,” a perverted inversion of Godard’s famous quote that “cinema is truth at twenty-four frames per second,” refuses to let that happen. To our abject humiliation, as we cheer for Naomi Watts, the second captor (Michael Pitt) reaches for the remote control on the couch, presses pause, then rewind, and the film reverses until the moment right before Watts grabs the gun and the scene plays out again, this time with the captor reaching the weapon before she does. Haneke simply refuses to let us off the hook.

As North American cinemas pay out big bucks to anything that remotely resembles horror, Funny Games occupies a strange and dark corner of the genre. Neither directly horror, at least not like the aggressively popular variety like Saw or Hostel, nor as distanced a thriller as something from Hitchcock, Funny Games is a unique experience, deviously psychological while operating as a dark commentary on our appetite for thrills. The threat of violence is as palpable as the popcorn we’re eating. While hauntingly reminiscent of the debate over youth and violence originally spawned by Kubrick’s A Clockwork Orange, Funny Games is different in that it is a sophisticated and overt excercise in the manipulation of the viewer’s relationship to on-screen violence, despite the fact that most of the violence happens off-screen. With characters breaking rules and speaking directly to the camera as they appeal to our awareness of the conventions and expectations of the horror genre, Funny Games is a violent and disturbing exploration into the meaning, or meaninglessness of the violence that exists around us. Its lingering images of heads in pillow cases — reminiscent of the post 9/11 scenes of prisoner abuse at Abu Ghraib — its nonchalant attitude towards violence and murder and its ardent disrespect for the cathartic desire on behalf of the audience is an inescapable reminder of the violent images we are confronted with everyday. It’s a painful and uncomfortable challenge set in contrast to the passive tendencies of the regular movie going public. And while Hollywood continues to churn out big budget and bloody horror films, this meditative and nihilistic narrative dares to asks a lot of its viewers. The question is whether North American audiences are up for the challenge.