Ten of the Ten Thousand Things Wrong With 10,000 BC 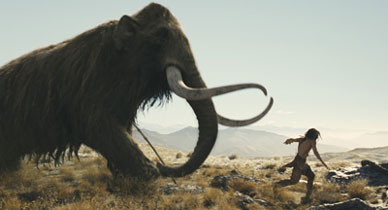 This one is unbelievable. Quite frankly, it’s amazing. And jam packed. Jam packed with every single clichÃ¨ ever used to tell a story. With this kind of computer generated epic it’s kind of defeatist to take it seriously, but there are some basic rules of consistency that, if followed, would allow you to actually bring your brain along for the ride for a change. Instead, the story goes as follows: A tribe of prehistoric people get jacked by a sophisticated band of foreign meanies who kidnap their women and children, including our hero’s blue-eyed girlfriend. He and a small band of hunters set off to bring them back, and along the way join forces with other tribes who have suffered the same fate. Together the makeshift army travels across continents, following the north star and eventually brings down the evil pyramid building empire that has enslaved their people. Psychically guiding the trip from her hut in the mountains is a medicine woman who has visions that tell of an ancient prophecy about a hero with a white spear who will free the world and bring life back to the barren lands. Guess what happens?

1. There should always be breath when people live in a cold climate.
2. Prehistoric people didn’t have good teeth.
3. Enough with the prophecies. Overall they are overdone, tired and a lame way to create an unintentional hero out of a normal guy. Even worse is one that has a white man bringing together all other races in the battle against some vague Persian-like evil.
4. Dreadlocks are NOT OK as a hairstyle for prehistoric Europeans. More twiggs.
5. Do all marauding bands of baddies arrive on horseback and have mean looking animal skulls on their helmets?
6. If you are going to promote that you have massive beasts in your movie, go the distance. Give us more than a few furry elephants, a couple of carnivorous ostriches and one saber-tooth tiger that conveniently only appears for one scene… in order to justify the ridiculous prophecy.
7. When you kill an adversary, make sure they are dead or they will inevitably kill you from behind as you run in slow motion. Twice.
8. If you are an evil tyrant making a sacrifice to prove a point, it is important to do so with style. Don’t just throw some random guy nonchalantly off a ledge. Make a show of it! Otherwise how will the million slaves hard at work understand it was a sacrifice?
9. If you kill the freaky headed bad guy to prove he isn’t a god, at least let us see his face so we know why he was so darn freaky.
10. Slow motion does not necessarily equal dramatic tension, especially when it is a spear throwing sequence from far away.

Bonus: If you work from the premise that women and children are being kidnapped, when you save them, there should be some women. Men only cultures don’t last long.