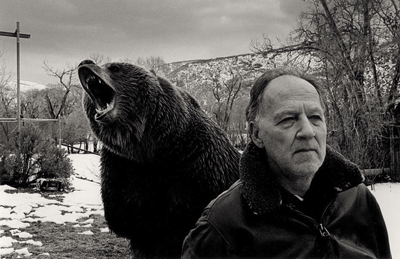 Werner Herzog’s reputation and legacy is born from his ability to approach both realism and fiction in a way that captures the inextricability between the two. Through the course of his career he has made documentaries that play like visual poems (Lessons of Darkness ’92) and feature films like Fitzcarraldo (’81), which mimic the struggles faced off camera as well. From dragging a boat up a mountain, to trekking through the jungle as conquistadors (Aguirre: the Wrath of God ‘72), or using only natural and candlelight for a Victorian horror film (Nosferatu ’79), Herzog’s approach to cinema is one that challenges itself to record fiction as reality.

Often quiet and personal, his films explore the philosophical relationship and the physical conflict between the natural world and the humanity that inhabits it. His desire and passion is to explore the failings of the human condition in its many forms. From jungles to villages, from the oil fields in Kuwait to asylums populated by dwarves, there is always a struggle that leads us further into the domain of our own fears and failings. In a recent LA Weekly article Herzog states that he makes no distinction between fact and fiction, that even in documentaries choices are made in how to frame a shot, which “is a modification of what is already out there.” So with this in mind Herzog has made a new documentary film called Grizzly Man. It is the story of Treadwell, a young man who forgoes his dream of being an unemployed actor and moves to Alaska, where he spends 13 summers living unarmed among the bear population in Katmai National Park and Reserve. Treadwell and his girlfriend record their experiences as natural champions, often shooting multiple takes and staging shots in order to offer better images. Things go well until the fateful day when both are attacked and killed by one of the bears in the park. Though the lens cap was on, the microphone recorded the last minutes of their lives and though not heard in the film, the transcript was printed in a recent issue of Vanity Fair.

Grizzly Man is classic Herzog. The story of a man’s need for recognition and fame, it is also the story of a real struggle of the human will as it faces off against the uncontrollable destiny of nature, the results of which are often devastating. Treadwell is a man attempting to find strength by leaving a world in which he doesn’t fit and moving to one where he is even more of a foreigner. For Herzog, and ultimately for Treadwell, the natural world is as dangerous as it is peaceful, and despite our personal desire for control over our own lives, there is no escape from life’s only certainty; death.