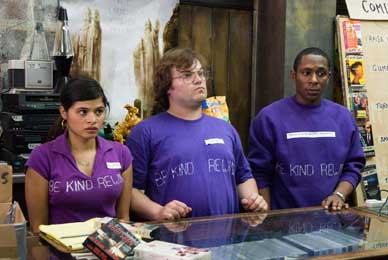 There is no doubt French born director Michel Gondry is a visionary. His skillful and fantastical mind manages to find humour and childlike wonder in everything and his ability to craft imaginary worlds out of cardboard and pipe cleaners is irreproachable. Both Eternal Sunshine and Science of Sleep present crafty love stories where what happens inside the characters is so wildly original and lovely that you are simply overcome by the quirky vision Gondry literally constructs. And so it is with his latest, Be kind Rewind, about a couple of old school (meaning VHS only) video store buddies who, after a freak accident that demagnetizes of all the cassette tapes in the store, embark on a ridiculous task of replacing the erased movies with amateurish but brilliantly devised short versions they shoot themselves.

Once again Gondry displays his mastery of the cardboard set, as Jack Black and Mos Def recreate and reshoot versions of Ghostbusters, Robocop, Driving Miss Daisy, 2001, Boyz in The Hood and many more. Like overgrown children playing out their favourite scenes from their favourite movies, they are living out the dream of every movie geek (like the kids who remade Raiders of the Lost Ark. To their surprise, the movies are a total hit. Customers begin to rent the tapes in droves, and Black and Def can hardly keep up with the demand. Here Gondry is at his magical best, recreating pivotal scenes with playful ease and brilliant deviousness, and you can only watch in wonder at how he manages to recreate the rotating space station jogging scene from Kubrick’s 2001.

There is no question that the movie is a love story – an ode to Gondry’s absolute love of movies and the inventive spirit behind them. That is its charm and its strength, but where the movie suffers is in its overall improvisational nature. While the movie recreations are so magically effective, the overall power is lost as both story and dialogue come across as loose and uncertain. We wait for lines of dialogue to carry the characters past the novelty of their recreations, and for the story to come together with the confidence Gondry applies to the cut and pasting of the worlds he imagines.