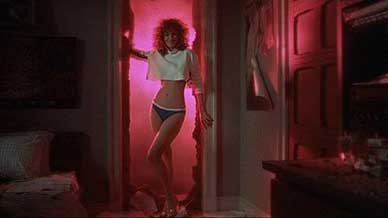 Just because we think things are funnier if you do them over and over again, we’re happy to promote our appropriation of onlyams.com tonight by providing you horndogs with a free movie. Now lets not be inappropriate here. The website may feature amateurs, but we’re 100% professional and fully aware that the Astoria is a family place. We wouldn’t want any of the kids to be offended, or that guy at our last screening who was eye-fucking our film editor to get aroused again. Yeeeuuuck. As such, we’ve decided to show something just as titillating as real porn, but rated PG, featuring Oingo Boingo on the soundtrack and staring Anthony Micheal Hall. No risk of boners there! Weird Science was made before nerds everywhere would find out just how close they would get to having sex with their computers. This film invites us into the pre-internet world of magical “government mainframes” capable of actually creating hot babes that don’t even have to talk in that robot monotone voice. We should mention here as well that if somebody wants to invent a computer capable of doing this and rip off Only‘s logo, we are totally fine with it.