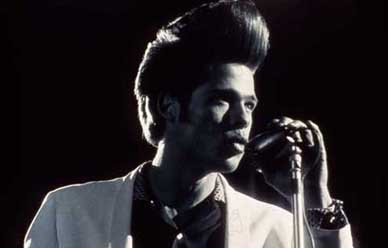 Back when me and my life partner, Jeph Wager, were still kids and being a “Nick Cave completist” was still very much a priority for Jeph, we fortuitously happened upon a VHS copy of Johnny Suede in a bargain bin at the Maple Ridge Saan store. At the time, I just needed some fifty-cent underwear (I am referring to the cost of my former underwear of choice, not underwear with a picture of a rapper on it) and we thought it would be pretty cool to see a movie where Nick Cave had a bit part as an albino teen idol. Unbeknownst to us, we were actually about to see one of the greatest motion pictures of 1992.

It is true that this movie had to be entirely re-shot after the Director Of Photography purposely did a bad job, ruining the footage out of jealousy. It is also true that it stars Brad Pitt and that writer-director, Tom DiCillo has even admitted that after fighting for the right to cast a then largely-unknown Pitt in the title role, he was ultimately disappointed with Pitt’s “dumb” performance. (Don’t forget, this was before everyone in the world had already become used to Brad Pitt and his dumb performances.) However, despite sounding like reasons to avoid Johnny Suede, I swear that they all actually serve to prove the contrary.

With Johnny Suede, DiCillo carefully constructs a complete, self-contained world. Unlike Dogme 95 or realist films, and those that have been influenced by those movements, which are set upon the pretense of authentically filming things the way they are, Johnny Suede operates on artifice and offers a representation of life that is almost opposite to the way things are. By making reference to a number of eras, he makes it impossible to pinpoint a specific time period for the film to take place within. The city we’re confronted with is like a labyrinth of perverted midget cowboys, impromptu back-alley date rape parties and lost teen idols.

And perhaps best of all, Johnny Suede also happens to feature some of the most brilliant dialogue of all time. While making a list with his best friend in order to help decide whether he should move in with his girlfriend, Pitt’s character comments on how his girlfriend always has “nuts and crackers and shit” at her house. Pitt’s friend responds: “Hey man, you could eat it when you watch TV. I’m gonna put that under ‘snacks’.” I agree. I would also put that under snacks. Good call.