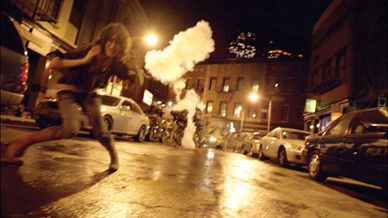 1. All big, city destroying, human eating monsters kind of look the same.
Gone are the goofy days of Godzilla or the Stay Puft Marshmallow Man (not to mention that if the Ghostbusters had been around this kind of shit would have never happened), now they all just look like the monster from The Faculty/Starship Troopers/Mimic/The Host/Men in Black.

2. Shooting the whole thing hand held presented some limitations.
While the concept of shooting an entire film hand held is really innovative and original, the “big-screen” experience does get kind of defeated… but that’s what happens when you leave the camera work to an amateur.

3. 9/11 looked a lot better.
On the other hand, this was more convincing than the moon landing.

4. Everybody really loved Rob.
Man, he had some incredibly dedicated friends. Even when he decided to be a retard and chase after his ex in Midtown, they came with him. And when they were all hiding in the subway and Rob was on the phone telling his mom how his brother had just died, man, people just wanted to console him.

5. Black people are always the first to start looting.
It’s true! The monster is throwing stuff and everyone is freaking out, and inevitably some people start looting an electronics store (free shit!), and guess what? They’re ALL black! Wow. Some stereotypes even follow you to the movies.

6. It pays to be the guy with the video camera.
Not because people will be nicer to you or you’ll get with the chick you like (even when her eyes start to leak blood – SPOILER), but you do get to live for the entire movie. On the down side, not much actual on-screen time.

7. If all the rats are running you should be too.
You don’t have to find out what they’re running from, it’s always bad!

9. The statue of liberty has a small head.
Not to be critical, but we were expecting her head to be a bit bigger in real life.