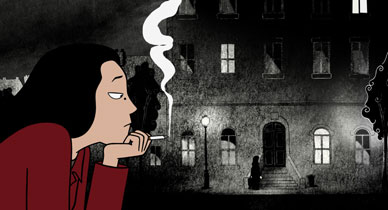 Graphic novelist and filmmaker Marjane Satrapi is one of the good guys. If you’ve read her award winning graphic novel series Persepolis or seen her animated film version of the series, you’ll know she is no stranger to clashing cultures and war-torn life. The four volume series based on her “own experiences” follows a young Iranian girl who’s into punk rock and communism growing up in Iran in the 1970s and ’80s. In the stories and in reality, Marjane has seen revolution and regime change, the rise of religious fundamentalism, the Iran vs. Iraq war and the wave of anti-Westernism that has washed over her country. As a teen she moved to Europe and she now lives in France, but her books are popular around the world… We didn’t get to talking about her new movie version of Persepolis that much.

ONLY: I read somewhere that you thought everyone should try to live in a different country at some point in their life.

Marjane Satrapi: Well I know it from my own experience, that when you come from somewhere, you always have the feeling that other places and people are weird – like you can never relate to them. So it’s this idea to be able to understand that human beings, no matter where they are from, are exactly the same. For me this really opened my mind. Like the first time I came to America. I grew up with the idea that America was the worst place in the world. I was too young to understand that American policy and American people were not the same thing, and so when I came to America I got a big slap in my face because they were really much nicer than what I expected. The second time another slap, and then another until around the time of the election in America. Me, who was called an “axis of evil” by the American government, and I was the one defending Americans in France by saying: “No they are not all pro Bush,” that it is a little bit more complicated and that there are other people like you. To come to another place and to try to understand its people, to see that because people are from another place they are not necessarily your enemy… I think this is extremely important.

ONLY: I guess the greater understanding of perspective, the more tolerance you have.

MS: Absolutely. Because you just make your point of view wider.

ONLY: So where do you think this disconnection comes from? Is it in the hands of politicians and those who seek power who constantly misrepresent other cultures? Because it seems that if you have traveled anywhere at all you come to understand that there are good people and bad people, no matter what culture.

MS: Because we want to feel good where we are. If everywhere else is crap then we are very happy. I know for example in England, any time they have social issues like the working class that is completely suffering, that they are completely fucked up because of policy, they start showing images of kids in Africa that are dying, just to tell people “you should be very happy.” This is a good way of doing it because you end up pulling everything down. But it’s also something more perverted than that. For example when they show you Iraqis and they tell you that they are “the axis of evil”. After that moment you forget that these people are just human beings like you because they are reduced to some abstract notion, and it’s very easy to put a bomb on the heads of people you don’t consider people any more. If you know that these people are just like you and they have brothers, sisters, parents, hopes and love, then it becomes a lot more difficult, and then how are we going to sell the arms? And how are we going to make war? I have the feeling that I talk like a hippy… all these shit heads have turned me into a hippy. And that’s really weird because if someone who acts egocentric, selfishly and individualistic like me has to become a hippy, that means there are big problems in the world.

ONLY: You grew up in Iran and then moved to Europe where you were able to achieve a level of individual expression. Do you feel any frustration or sadness about this division in your life?

MS: Well it is a division, but “division” is not the way i want to say it. There is of course a division in the world, but it is certainly not between east and west. The real division is between the fanatics and the narrow minded people and the rest of the people. A Muslim fanatic, a Christian fanatic, a communist fanatic, an atheist fanatic, whatever, they are the same. Their reasoning is “if you are not with me you are my enemy. If you don’t think like me then I have the right to put you in jail or kill you.” Then there are other people who are like “OK you don’t think like me, no problem.” We might not think the same thing but it doesn’t mean you are my enemy.

ONLY: We can live side by side…

MS: And be different. I mean, what’s the big fuss? I’m not a religious person, but if people are religious but they don’t make me shit with their religion, no problem. They can do whatever. Who am I to tell them what to do and not to do? The problem is that when people think something and if you don’t think like them, then you are an idiot. If you accept that people can have any belief – we can learn about so many things we have in common anyway – why not concentrate on those things and let people concentrate on their own lives? It’s like this issue of banning the veil in France. You’d think that because I was not very happy wearing the veil in Iran that I’d be for the law… but no. It’s because I was pushed into wearing the veil on my head. But people taking away the right of others to wear it is the same thing, but it’s just going in another direction. Who are we to say to people what to do?

ONLY: Here in Canada, our present government is trying to pass a law that prevents people from wearing veils when they vote.

ONLY: They claim it’s an identity recognition issue.

MS: Well, if they have the scarf just on their head. That’s very bizarre.

ONLY: Even more so because in Canada you are able to mail in your vote.

MS: So you can vote through the mail, but not if you are wearing a scarf? This is disappointing coming from the Canadian government. You are supposed to be the good ones. If this was the American government, then OK, I could see that.

ONLY: That’s the Canadian Conservative government for you.

MS: Well this is what I have to say: fuck Conservatism. I’m sorry if you can not write that…

ONLY: Oh I can write that.

MS: I mean Jesus Christ, these people. If we could just get rid of them, we would have a much better life.