There Will Be Disappointment 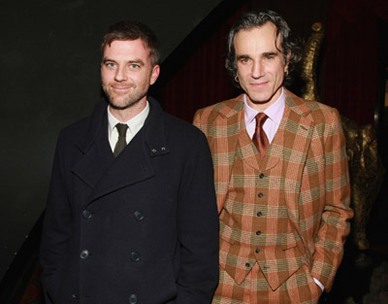 A few of us went to the movies on Sunday night, wide eyed in anticipation of the best film of 2007 and the best display of acting ability ever! So, spoiler alert? OK. Anyways, the experience was incredible. We got the best seats in the house AND Dan Bejar practically sat right in front of us (we share the same interests!) AND two plus hours into the thing our mouths were agape and everyone in the theater was thinking, “Oh. My. God! We are witnessing film history and this is incredible!“ To sum it up, expectations were being met, times ten. If you want to know why, people have devoted lots of words to the film and we’ll let you use the internet to find them. However, there’s a weird thing about almost all of these words. Praise is heaped, grandiose statements are made, and hardly ANY of them mention what we’re going to go ahead and spit out already: the ending completely ruins it. Completely and entirely ruins it.

Overstatement of the millennium? We wish. Attempting to get inside the head of writer/director P.T. Anderson on this one has been rendering us sleepless for the past four nights. It’s hard to believe that he was trying to turn one of the most studied, enjoyably protracted films in recent memory into this generation’s Scarface (as one website has accurately suggested), but that’s exactly what happened. Daniel Day Lewis’s mesmerising monster suddenly cartwheels into a perfect combination of “Here’s Johnny!” Nicholson and “Whoo-ah!” Pacino, the characters turn into caricatures of themselves, the drama becomes unintentional comedy, and before you even have a chance to realise P.T. fell asleep at the wheel and Brian De Palma took over, the plane has hit the building and the towers have fallen… There, we got it of our chest. That’s better.