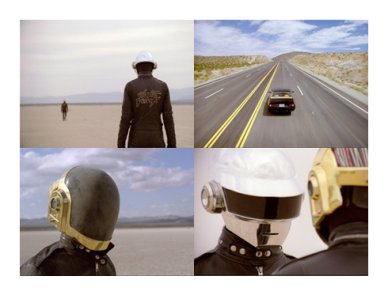 This is kind of a rare situation, but here goes. If you are planning on going to see Daft Punk’s Electroma, you’re going to want to make the best of it and prepare yourself… chemically. The story is simple: two car driving robots (looking a lot like D.P.‘s Thomas Bangalter and Guy-Manuel De Homem-Christo, but oddly not played by them) arrive in town and proceed to get human looking latex heads molded over their helmets. Then they go outside where the citizens (also robots) look at them like they are aliens. They get chased, their latex faces melt in the sun, they run away from the other jealous robots and then go out to the desert to die. All of this takes a little over an hour.

Released internationally a year ago, Electroma was met with very mixed reviews, and it’s not hard to see why. The first full length directorial effort by the French electronic duo, Electroma is a strange and kind of lonely piece of work. With no dialogue, and strangely no music from the group, the film is beautifully composed; Bangalter reportedly purchased and studied over 200 copies of American Cinematographer magazine in order to prepare for the shoot. To be fair the film is as lonely as it is beautiful, and the sparse, even minimalist construction does work to communicate the alienation of the pair of robots on their quest to become human. Shot almost entirely in California, the barren tumbleweed landscape and salt flat badlands mirror the type of barren internal emotional landscape we might connect with the robotic quest for humanity. It’s like a lush, experimental pantomime filled with silence and desolate beauty. Frustrating for those looking for a high spaced sci-fi electronica movie, serene and poetic for those interested in taking a bit of an internal galactic detour.