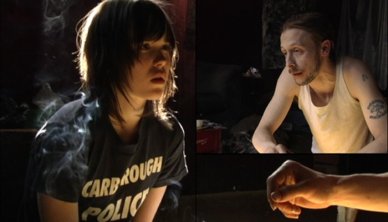 AN INTERVIEW WITH DIRECTOR BRUCE MCDONALD

By now anyone interested in Canadian cinema should be familiar with Bruce McDonald’s road movie trilogy: Roadkill, Highway 61 and Hard Core Logo. These are staples. And while some of his other work remains… umm… less praised, his latest film Tracey Fragments is a really brave and artful achievement. Based on the book by Maureen Medved, the film is about Tracey Berkowitz (Ellen Page) who looses her brother one day while on a walk down by a river. In a panic, she runs away from her already dysfunctional home life and travels through the city looking for him. But the film is more complex than that. Composed entirely of multiple split screens of all shapes and sizes, the film moves forwards and backwards, playing and replaying thoughts, feelings and fantasies that occupy Tracey’s mind. She is our narrator; we see the world as hers, and it’s not always a nice one. The effect of having your eyes and mind follow the moving frames within frames might be seen as exhaustive, but it daringly captures the multitude of thoughts and memories that flood each of us at all times, and brilliantly reflects the fractured, fragmented mind of someone feeling too much, too hard, too fast.

ONLY: Watching this movie reminded me of some elements of Picture Claire, like that was the beginning of something. You started to use split screen there a little. In terms of aesthetic, was this in any way a chance to expand on things you’d only had a chance to played with?

Bruce McDonald: Yeah, it’s funny because it’s the same editor. While the films are very different, my last three, Claire, Gillian and Tracey are all kind of damaged women films. With Picture Claire we kind of got excited about the split screen thing because we wanted something cool and groovy and pop art… but we did it a little bit and there was a lot of resistance from producers and people. Because there was a lot more money attached to it, everybody’s instinct was to make a movie like a real movie should be made. So the sense of adventure and real creativity — everything was reasonably handsome but, nothing really caught fire. With Gillian it was a lot more fun because we could sort of wank it up. Like, the design was really great. And when we thought about this one and how there’s almost a trilogy of chick movies, and we thought fuck it, let’s just be fearless and take some of these chances. We always loved the split screen thing, but we didn’t know how to do it. But this movie is the perfect story for that because it’s kind of a memory thing and a nervous breakdown thing — her life’s falling apart, she’s fifteen years old and while she’s not seeing the world for the first time, it’s like she’s often experiencing great intensity for the first time.

ONLY: As an aesthetic, I thought the frames within frames really succeeds in this movie, and it’s a rare example where form works to help tell a strong narrative. But you’ve gone and made an art house movie. Does it worry you that you’ve made a completely non-commercially viable film? Like, people have a hard enough time reading subtitles.

BM: When you spend enough time with anything, of course you want people to see it. And that’s always a bit of a concern, but the initial rule was be fearless and just fuckin’ go and not worry, but we did try to add touches where we tried to provide corridors for the audience — having touchstones like Ellen Page as Tracey, or having Broken Social Scene do the music. So in our own crazy way we knew we were being creative and very experimental, visual… kind of laser Floyd explosion that on it’s own could be kind of alienating maybe, but having a very emotional actress and some great music working as your entry points… they’re our guides.

ONLY: And it’s getting a wide release.

BM: The fact that Odeon picked it up surprised me. And the fact they’re actually going to release it surprised me. We had tried to sell it earlier on, and nothing. Somehow we got it made, and then the first people to embrace it was this really conservative company out of Bavaria, Germany, who had done Run Lola Run. We showed them a rough cut and they loved it. And they gave us some money to help finish it. So it’s kind of hilarious and kind of thrilling because, originally, I had the same attitude as you.

ONLY: Well on the surface the plot is quite small.

ONLY: But it’s the ability to run parallel mental positions that is really exhilarating because the story is short from A to B, and while the use of the split screens doesn’t always move the story forward, it moves the film forward. It’s better than anything Brian DePalma ever did.