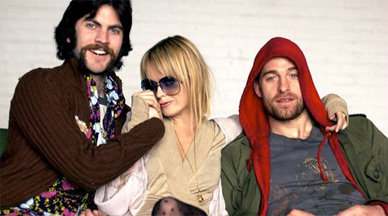 BEING A BURNOUT IS A BADGE OF HONOUR

Allan Moyle is a bit of a tripper. Shaved bald with glasses, he brought me up to his hotel room where he finished his nicoise salad and kept pouring himself white wine during this interview, which ended when the tape ran out and after he handed me a pin for his movie that looked like a Canadian flag but had a marijuana leaf in place of the maple leaf. The Canadian born director has been making movies in the States for years, but returned home – to Canada, at least – to direct his latest film, Weirdsville, one of Only‘s favourites at this years film festival. Famous for Pump Up The Volume, the Christian Slater starring pirate radio gem about teen angst and fighting the system, and Empire Records, the burnout record store comedy about a team of misfits who try to save their little indie store from being bought out by “the man”, Moyle’s films consistently contain a common thread: an affinity for the outsider/stoner, struggling to keep it real. Weirdsville is a bit of a departure from that aesthetic in that it doesn’t feature any system to fight against. However, the story does revolve around a group of smart ass junkies who can’t manage to get anything together. They owe their dealer a lot of money, one of them O.D.s and is mistakenly left for dead, they have a run in with a Satanic cult and totally fuck up a plan to burgle a safe in a mansion.

ONLY: You shot most of this movie in Hamilton?

Allan Moyle: And some in Wayne Gretzky’s home town of Brantford.

ONLY: What drew you to Ontario to film?

AM: Well I’m Canadian, a Montrealer, but I do quite a few movies in Canada. So I return here once a year to do something, somewhere. I’ve never directed a movie in Vancouver, and I’m dying to. (Whispers) It’s so great here. And you know this is the home of my first drug experiences, and the movie is all about drugs.

ONLY: I wanted to ask you about that. It seems fair to say that your films often contain these types of characters – outsiders or burnouts…(the door opens)

AM: Chioko! Hi! Chioko this is Adam, Adam this is my wife Chioko. Chioko, you can sit and hang, or… have you decided which movie to see tonight?

AM: Chioko has been putting up with this stuff all week… she’s great. We’re going to see a movie tonight during my screening. (Yelling) Chioko! Chiokooo! There’s wonderful food downstairs in the lounge.

AM: OK… Oh we’ve made up these cool little pins that have the Canadian flag but with a marijuana leaf instead of… Let me see if I have some. (Gets up and goes into the bedroom closet)

ONLY: (Loudly) So what do you think is the appeal of these kind of burnouts for you?

AM: (From the other room) Oh wow. Well, I’m a burnout, hopefully. (Louder) It’s a badge of honour my friend! (Walking back) I got to remember to give these. I came from Robson street and went into a bong shop and I gave them a ticket for tonight and I said “There’s a bong shop in Toronto that’s going to present our first screening. We’re opening at 4:20, and they’re going to have a basket with these things.” (pulls out a big bag of pins)… Here you go (gives me a pin), isn’t that nice? Yeah, so it’s going to be presented by The Friendly Stranger, which everyone knows better than wheat, is the crop from Vancouver.

ONLY: So where did you get the idea for this movie?

AM: I didn’t. Can’t you tell, if you know my other movies this is a departure? It’s because the writer, it’s his movie. I couldn’t have invented that shit. It’s all Will Wennekers’ thing. He’s from Regina and he cooked it up while working at a drive-in in the middle of winter, so I have to say with great pride that the thing comes from the inside of his brain. My vision was to execute his vision, which was hard in the end. Getting the tone was not easy because there was no tone, no known tone, but we stumbled forward. But there was just something so sly, mad and gleeful about the script that I knew I wanted to be involved.

ONLY: You managed to capture some really great and funny character moments, and in a movie that is so ludicrous on some level, having those anchors of solid characters was a real strength.

AM: I appreciate that. Because you can see how messed up it could have been. Especially if you had the wrong chemistry between the two leads.

ONLY: They worked off each other really well.

AM: That’s luck. They say directing is casting, and I agree. And I learn it the hard way with every movie. But the two leads are both great actors. Scott Speedman who had done Felicity and Underworld and Wes Bentley who was the moody kid in American Beauty.

ONLY: The “it’s the most beautiful thing in the world” guy.

AM: Yeah that was one of his lines, but the real Wes Bentley is the guy in our movie. Sweet, fun, doesn’t take himself seriously.

ONLY: One interesting thing was that these characters are drug addicts but you didn’t make them tragic.

AM: Isn’t that so Canadian? Isn’t that sweet? It seems so ineffably Canadian, the sweetness at heart.