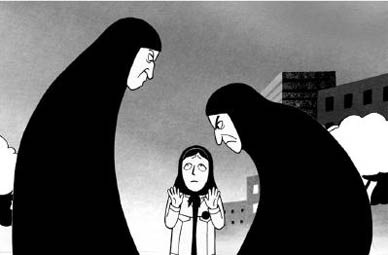 ONLY PICKS: PERSEPOLIS
Winner of the Jury prize at Cannes this year, Marjane Satrapi the book’s creator maintains her vision as she and her friend Vincent Parronaud render this animated story of a young Iranian girl’s experiences of growing up after the Islamic Revolution in the late 1970’s. Originally a French language graphic novel, Satrapi’s story is largely autoboiographical as it depicts a nine-year-old Marjane struggling with the rules imposed on the Iranian people by the new religious fundamentalist government. Young Marjane is a regular kid who likes to listen to punk rock, but she is now expected to put all that aside and comply with the religious degrees that demand women wear veils and behave in accordance to the fundamentalist doctrine. The story is filled with personal rebellion, frustration and regret as she sees her home country transformed into a place where people disappear and intolerance has suddenly become the everyday tone. Inlisting the voices of people like Catherine Deneuve and Chiarra Mastroianni for the French language version and Gena Rowlands, Sean Penn and Iggy Pop for the English version, Satrapi’s novels and film have elicited dissaproval from the Iranian goverment but remain moving testaments to the universal humanity we all share. —AOT