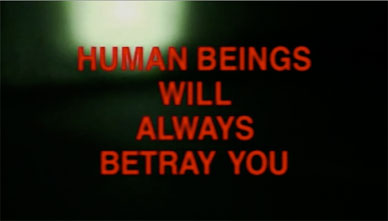 ONLY PICK: THE TRAP: WHAT HAPPENED TO OUR FREEDOM
In just the last ten years, no documentary filmmaker has so encapsulated the last hundred as the BBC’s Adam Curtis. His three most recent documentaries The Century of the Self, The Power of Nightmares, and his latest outing premiering tonight at the VIFF, The Trap, address some of the most important issues of the 21st century. In past documentaries Curtis has tackled such light and frivolous topics such as conceptions of the self, Islamism, neoconservatism, fear, public relations, and Freudian theory. In The Trap, Curtis explores our modern concepts of freedom, like our freedom to choose between toothpastes with either ‘whitener’ or ‘whitening action’, and the kinds of freedom that other countries get bombed into having. What Curtis points out – as many have before in the comments section of YouTube videos – is that these freedoms in the marketplace only lead to greater economic and social disparities, while the alleged spreading of freedom has created a society that is actually more controlled and repressed. Where Curtis’ award winning documentaries differ from stoners waxing philosophical (other than the obvious) is his impenetrable methodology, instituting his argument piece by piece to draw the most logical conclusion to some of our world’s most profound and complex problems. Ever wondered how the western world got so fucked up? Before you go to God, go to Adam Curtis. He may not be magic, but he’ll give you a better explanation than demons and evil spirits. – CR