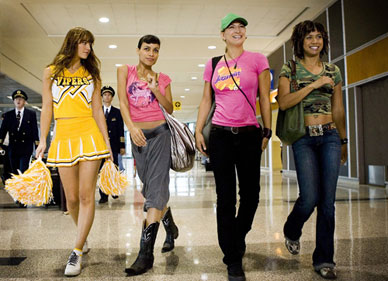 If You Love Them Set Them Free.

You can see, or rather hear, its nuanced existence in his very first film. Despite the fact that not one woman is featured in Reservoir Dogs, and that it’s a movie made for guys who like movies, in that first and famous dialogue scene with the gangsters sitting around the diner table, there is the tangible indication that Quentin Tarantino is a feminist at heart. He creates an explicit moral divide between the gangsters who refuse to tip the waitress, and those who openly demand it. It’s about fair play, not pity, and is the kind of feminism that, while easily overlooked, is as subversive and fresh as his genre mash-ups. If the simplest objective of feminism is to forward the equality of women, then his constant construction of films with women as central characters is a rare and purposeful act, especially within an industry that is largely recognized as a big boys club. Of course, it’s not the man bashing, bra burning liberation kind of feminism, or even the politically correct kind. Instead, it’s one where women can wear dresses or suits, look their best, take a beating and still kick some ass. It’s the new Femanism.

Much has been written about the objectification of women in cinema and the existence of the male gaze as it pertains to the power relation between filmmaker and audience identification. And while some will argue that his casting of women still plays to stereotypes and conventional perceptions of beauty (they may kick ass but they are still gorgeous), in Tarantino’s films there is much more at work than exploitation. Simply because a film is about a woman does not make it feminist, nor does the substitution of female characters in roles traditionally occupied by men. But this is not what Tarantino does. His characters are consistently empowered women who manage to maintain their femininity despite the threats of violence and actual violence facing them. They operate in a conventionally male world where rules have already been established, but they constantly break with convention as they are forced to take matters into their own hands and minds. They are not defenseless, but constantly act in response to the situations presented to them by the men (and other women) who want to do them harm. They are women in a man’s world — one that would have them disappear or die with little indifference. It is explicitly this idea that provides the argument for Tarantino as feminist. His ability to develop backgrounds and personal motivation guides his characters through the often dangerous world governed by masculine over-confidence.

For the most part Death Proof is devoid of action. His female characters spend most of their time driving in cars, talking about cars and boys, having breakfast and sharing funny stories. They do what regular girls do when they are alone — talk. Only when provoked do they transcend from a chatty bunch of chicks to a serious set of fast and furious women. What lends credibility to this transformation is that by the time it happens, we have an understanding of the relationships between the characters. We know what interests them and how they interact, and especially after having seen real life stunt woman come actor Zoe Bell actually dangle herself of the hood of a speeding Dodge Charger just for kicks, do we understand immediately that they are prepared to go the distance and are also fully capable.

At it’s most basic, Jackie Brown is about an older woman struggling to find a way out of a go-nowhere-situation. She is surrounded by men, both cops and criminals, who want to bring her down and throw her away. She is a fully realized woman, concerned with getting older and with losing her job. She is not dependent on men, nor looking for one to fulfill her, and at the end of the film drives away alone, but with the money. While ready to use a gun, it is her brain and her smarts that help her devise a plan to come out a winner. In Kill Bill, Tarantino, along with co-creator Uma Thurman, crafts the ultimate action epic, and delivers a violently moral tale of justified revenge. The Bride suffers all forms of personal horror, from the murder of her unborn child and husband to the comatose rape she experiences in the hospital. As viewers, there is no way we cannot identify with her desire for revenge. And while it plays to the classic exploitation strategy, it is the scope of the story that secures our sympathy and our compassion. It is this kind of identification that is a rare experience for films about crime capers, samurais and car crashes.

Tarantino has consistently liberated the female protagonist form being at the mercy of men’s hands, and from the conventional, limited roles of the Hollywood machine. His characters are comfortable being women, but aren’t afraid to get a little dirty (or bloody). As if offering a singular defining image, the last freeze frame in Death Proof says it all as psycho driver Stuntman Mike is dragged out of his car of death and beaten by the very women he was trying to terrorize. In that one last moment Tarantino gives us the relief we hope for, the catharsis we want and the justice we expect. And so what if they show some skin? Nothing says “fuck you” like a little flash of panty right before you get your head kicked in by a bunch of liberated chicks.