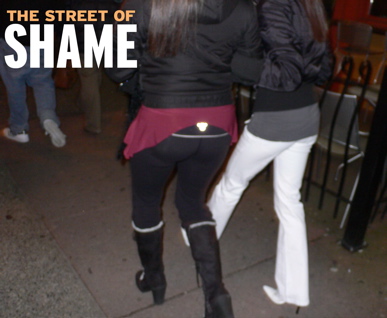 Over the weekend, the Province ran a surprisingly interesting series of articles detailing the insanity that is the Granville Mall, and how powerless the police seem to be in combating drunken jock hooligans and their insatiable thirst for violence and urine. It’s rare for us to give the Province any journalistic cred, seeing as it’s a biased tabloid with really easy Sudoku puzzles, but in this one instance they actually covered a pertinent story really well. Except for one glaring omission.

The real tragedy occurring on the Mall–which the Province somehow failed to mention–is not the brawling and defecating. It is that on any given weekend night, Vancouver plays host to one of the largest and saddest parades of fashion no-nos in all of Canada. Blame the influx of suburbanites if you want, but the massive faux pas that goes down here every weekend is enough to supply What Not to Wear with enough material to last until hover cars are invented.

Above is a classic example. Wearing yoga pants to go clubbing (you can tell they’re yoga pants because of the TNA logo, which is displayed on purpose) is just as obvious a Don’t as wearing fuck-me boots snorkeling. Unlike most of the trends exhibited on Granville, which are usually just really dated and bad (Uggz and mini-skirts, those gay bell-bottoms with the elaborate rhinestone designs and “Native” stitching all over them, anything from Le Chateau) the yoga pants-as-evening wear trend that’s happening in this city is totally disgusto.

We don’t really care if Vancouver becomes renowned for it’s raucous night life and pervasive pee smell. We just don’t want to be known as the city where all the chicks wear Lululemon to effing ’80s night.