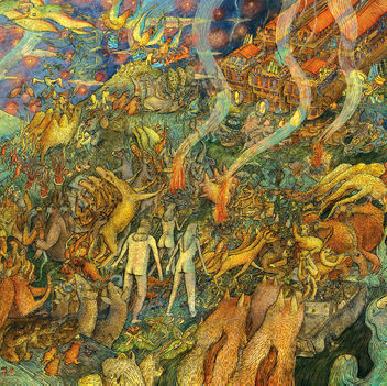 WARP RECORDS
A band name composed of three exclamation marks makes you hope that their music is really something. Whether it be “really crazy!!!” or “really intense!!!” or “really epic!!!” or “really chaotic!!!” or “Really controversial!!!”. Well that something for Myth Takes is “really danceable!!!”. And over the course of the ten tracks I rarely stopped wishing I were wearing white patent go-go boots and oversized sunglasses while grooving in the centre of a light-up dance floor. The immaculately collaged beats almost make me forgive the band for finishing this record on such a mellow note, and for the moments when singer Nic Offer’s voice borders on obnoxious. Like when he strays away from little grunts, yelps, and speak-singing and opts for more melodic, ‘real’ singing. It just sounds cheesy, Nic.