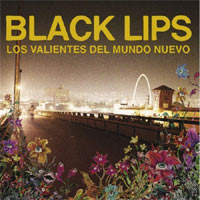 Vice Records
It’s weird seeing a small band you love get big, as is the case with the good ol’ B’Lips, who are now on VICE records. Rolling Stone even called their last record “one of the best debuts of 2006” (and “rockabilly punks” – WTF? – Ed.). Little do they know it was their 3rd LP, and it came out in 2005. Their success is evident when you see them play live now and all the lame douchebags who were crowding around the flavours of the week a couple years ago (when the Black Lips played here for the first time) come out in full force. But I said it before, and will again, if any band deserves this attention and recognition, it’s these dudes. This new live (in Tijauna!) album is pretty much a live greatest hits record, with one new song. It’s recorded amazingly, and almost doesn’t sound live, especially when you see the videos of the show, which include naked dudes, girls eating each other out, and Jared headbutting a crowd member. All their old songs on this are rock solid, standouts for me are “Not a Problem”, “ M.I.A.” and “Stranger”. Oh, and the new weird little guitar part in “Back to Boone” rules too. The one new song “Buried Alive” sounds like a long lost Brian Jones’ Stones song, with a Easten sounding guitar riff, reminiscent of Mothers Little Helper. But yeah, that song is FUCKING GREAT. And so is this band. Anyone who says they are selling out has Downs Syndrome. OK.