Yuma Nora â€”Jewels in the Snakepit 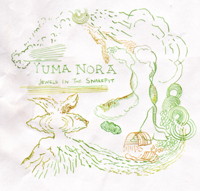 Colour me devastated. I was not expecting what I got. Don’t be fooled by the seemingly innocent packaging—this album is the doom bringer. Turn up your IPOD and listen well brother, for this is the merciless sound of your world choking on it’s own technology. I hear the limp howls of mankind—buried under the miasma of screeching industry—slowly suffocating alone in the cold misery of nothingness. I hear my death, I hear your death, I hear the very sound of dying. Shit is real. Now then, if you’re gonna be a coward and say this album is nothing more than a pretentious contrivance from charlatan hacks masquerading as true artists who bury their lack-of-talent under a facade of dissonance and no-wave/free jazz posturing (which I suspect you might) then I will say, ‘Hold On. Did you listen to ‘Sundown’? Well, did you?’ Because if you did you would realize that amidst all the cacophony and screaming machinery there lies total control. Yuma Nora knows how to craft a mood and know how to haunt you. For my part, I know this is genius. And if you can get through it and learn to love it I have a feeling this album will teach you a lot of things, though ultimately it will make you terribly sad.

_Out now on Not Not Fun