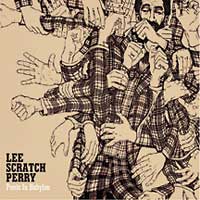 Narnack Records
If you don’t know who Lee “Scratch” Perry is, this isn’t the place to start. To being with, the renowned producer doesn’t produce his own album, lending own his scratchy vocals to it. Granted, he makes the most of this, giving himself shout outs in nearly every song (in “Pussy Man,” most notably: “I am Lee Scratch Perry, the cocky man… I’m Doctor Dick… I’m Doctor Quick… I’m Doctor Tree… I’m Doctor Lee… I’m Doctor Me”). But for those who know Perry primarily as the sinewy, bearded studio innovator, this might seem strange. Like thinking you’re buying weed but getting catnip instead, no matter how hard you pull on this one it’s not quite going to cut it.

There are some mix-CD-worthy tracks on the album, especially for a “Music to Make Tofu Scam By” compilation. A bonus remix by TV on the Radio’s Dave Sitek is of unfortunate note, coming off like an old man doing Nine Inch Nails karaoke. But that’s the thing about being labeled a “legend” — chances are your morning coughing fit will one day be remixed and released on vinyl.

Those who buy this album probably either know nothing about Lee Perry, or are so devoted that they’ll buy anything with his name on it. They probably also spend $50 on weathered pseudo-seventies t-shirts from the mall.