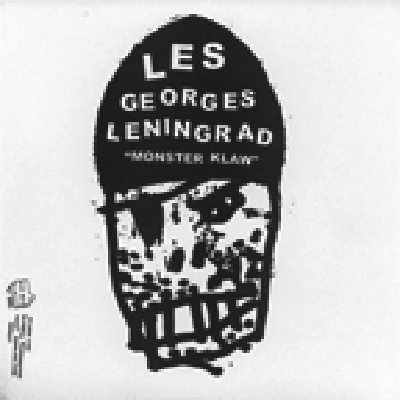 5rc I don’t understand how someone can maintain multiple bands that are so totally opposed. Die Monitr Batss is like this total “fuck you” thing. Even a “fuck you” to Nathan Howdeshell’s other band, the Gossip. And even though this record (as well as the recent split with A.S.T) actually has a clearly written song and totally catchy melodies, it still has a super subversive vibe. Their track on this 7” is called Clean Up and totally makes me picture them crashing a party and wrecking someone’s house. Only there’s that ever-present D.M.B. sexual weirdness that party crashing doesn’t always involve. Nate Preston’s hot sax on this track makes it so classic that I want to believe it’s New York 1978. The Les Georges Leningrad song, Monster Klaw is…well… Les Georges Leningrad-y. Same obnoxiolicious vocals and fuzzy bassy junk all crammed in, new-disco style, around them.