Pete Rock, Lykke Li, Be Your Own Pet and Jamie Lidell 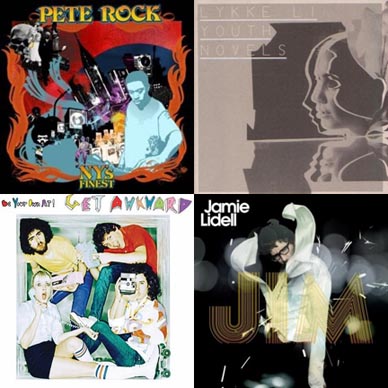 Jeph: Obviously this Pete Rock album is good. You can tell from the title (if you interpret it literally). The only thing that would have made it better is if the song which features Lords of the Underground was featuring Lords of Acid instead.

Meg: You interpreted the album title literally? I actually interpreted it figuratively. I just thought it was a figure of speech. Weird.

Jeph: There’s always the chance that he’s using the term ironically, like the way the New York Police Department uses it. Maybe Pete Rock is implying that he’s a racist thug that tries to push poor people out of the city.

It’s always nice to listen to foreigners sing for a little while because they pronounce stuff funny. Eventually that wears out and you just have to ask yourself if you would listen to this music if it wasn’t from some weird foreigner. The answer is always the same: of course you wouldn’t. What do you think we are? Some hippy?


Be Your Own Pet — Get Awkward

Only interviewed these guys years ago when they were young kids. Theoretically, they are now older. There is not really much to say about them, or this album. They sound fine. You probably like them. Meg and Jeph probably don’t. They sound really sincere, so all the power to them. Keep up the good work, kids.

Jeph: Yeah. This guy would have a way different career path if he had just gone on American Idol to become famous like most people. If he had taken that path, then right now he’d be giving Simon Fuller a rim-job for permission to put out another album. Allegedly.