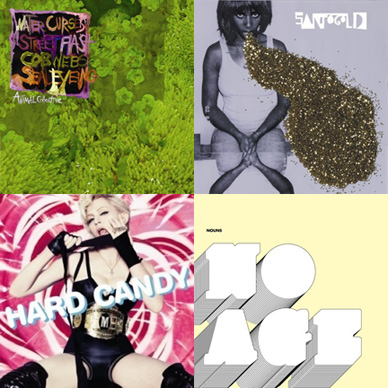 Animal Collective — Water Curses
True, this EP is only fours songs long, and we probably should have at least tried to listen to it before we wrote this. But we kept putting off listening to it, and then Lost was on for the first time in weeks when we actually sat down to write it, and when we listened to the first few seconds of the first two songs, we just realized that listening to four full songs was not an option for us. Maybe you could just ask someone from SFU’s film program what they think of this album. Better yet, maybe shut the fuck up.


Santogold — Santogold
Meg: I’m glad we actually listened to this album before reviewing it.

Jeph: Yeah. It is always tempting to just write a hilarious review and not actually listen to the album. But this album is actually different than I expected. I’m not really sure what I expected though. “Santogold’ isn’t a really contrived band name or anything. It’s not like we were reviewing something called “Hollywood Bear Attack” or something.

Meg: Enough with the “Hollywood Bear Attack” references. You’re totally just mentioning it again because you think that printing it here serves to copyright it as your new band name.

Jeph: No. I have no use for that name. It’s ridiculous. As a matter of fact, I would love it if some stupid bunch of 14 year old Tokyo Police Club fans adopted it as their band name. I’d love it. Santogold reminds me of Cyndi Lauper, by the way.


Madonna — Hard Candy
All things considered, this album is absolutely TERRIBLE. In fact, it’s hard not to picture the whole thing as a high-concept SNL sketch featuring Amy Poehler writhing around in one of Madonna’s ridiculous, flesh-toned bodysuit get-ups. Listening to Madonna try to tempt you with some of her “Turkish Delight” on Candy Shop is about as appealing as having your own grandmother slip you the tongue. No wonder she doesn’t let her own kids watch TV. Would you really want your impressionable, young, adopted and non-adopted offspring watching you flaunt your fifty-year old ass in front of an embarrassingly indifferent Justin Timberlake on television?

Jeph: Does this mean that you’re going to sleep and I have to finish this review myself?

Jeph: Aw man. But it’s hard reviewing semi-experimental rock albums that aren’t particularly bad, because there’s nothing to say about them. OK, whatever. Hey everyone, go out and buy this album. Sub Pop Records needs your money. Or don’t buy this album. It’s not any better than any local semi-experimental rock duos, and you can probably get any album from any local band that sounds like this for free.