Flight of the Conchords, Mariah Carey, Portishead and Duchess Says 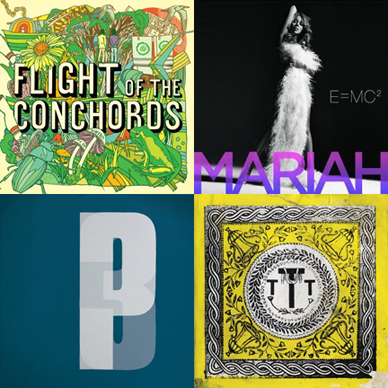 OK. We know you’ve already heard all of these songs. We’ve heard them too. If anything, this album basically serves as a reminder that music by novelty acts is really the best music of all time. Be honest with yourselves. If you are going to listen to some music, would you rather that music be funny or not funny? We don’t watch TV shows or movies, or read books that aren’t funny, so why should we listen to songs that aren’t funny? We shouldn’t, obviously. And this is probably off topic, but last year when we first started watching the Flight of the Conchords television program on HBO, Meg tried to play some of these songs for her parents. They were like, “We don’t get it. We don’t understand their reference points.” Then they watched all the episodes, and now they totally get it. In fact her dad even phones her up in a New Zealander accent and asks for “Brit”. It is kind of embarrassing. But that is probably beside the point.

Jeph: You know, I was excited when I saw that the first track was with T-Pain. Sure enough, I loved it, but it was a strange decision to start an album with a dog-whistle solo. Mariah Carey is strange. What kind of gimmick is that to always put out albums with higher pitched noises than everyone else?

Meg: Woah. I totally didn’t even hear that dog-whistle solo. I am pretty sure you are a dog. You know when Snoop Dogg sometimes morphs into dog-form and he is in the in-between stages of dog and man? Sometimes you look a little bit like that.

Meg: Yeah. “Side Effects” with Young Jeezy was definitely my favourite. Tommy Motolla is such a creep. And you’re right about Damian Marley, but you have to admit, his dad was pretty cool.

Jeph: I don’t mind this too much for a dance-punk band from Montreal. Could be worse. Could be a lot worse.

Meg: Yeah. And if it was worse, I would play it for a bully.

Jeph: That doesn’t even make any sense. Anyway, some of these songs are a little bit good. I don’t ever like to hear good stuff coming out of Montreal. I always get a little bit happier when Vancouver’s worst jerks move to Montreal, and it upsets me when I find out anything might make them enjoy themselves over there.

Meg: Yeah, you’re right. Except for the part about me not making sense. I made perfect sense. I’m talking about those kinds of bullies we saw in Autism the Musical. Those bullies were terrible.

Jeph: We didn’t see any bullies in that movie. We just saw people with autism reenact encounters with so-called bullies. But I will now acknowledge that what you said might have at least made some sense to you while you were writing it.