AZ, Elf Power, Does It Offend You, Yeah?, and The Sword 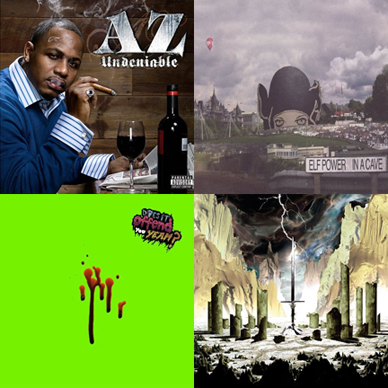 AZ – Undeniable
If you’ve read our reviews before, then you already know how this goes. We are going to give AZ’s Undeniable a good review because it is rap. Because all the other non-rap albums we had to review this week were particularly questionable, we’re going to give it an even better review then we normally would. And regardless of whether or not it is legitimately good, we recommend that you go out and buy this now; Or iTunes it, or whatever people do these days. We guarantee you are going to love “Parking Lot Pimpin‘”. Either way, did you think we would write anything negative about an album that quotes Spike Lee and Sean Combs?

Meg: Yeah, I know. In grade nine, an older boy once asked me if I ever had deep thought, ‘cos of how he had a deep thoughts club in Port Moody that he wanted me to join.

Jeph: That’s weird that you mentioned grade nine, because this band formed when I was in grade nine. Which was apparently fourteen years ago. I didn’t know that they formed then from experience. Fourteen years ago I’m pretty sure I was just into Green Day’s Dookie and Moxy FrÃ¼vous’ Bargainville.

Meg: Wow. You’re so old. I’m pretty sure that I was just into trying to get to second.


Does It Offend You, Yeah? – You Have No Idea What You’re Getting Yourself Into
Before you get all accusatory, and assume that Does It Offend You, Yeah? was going for some lame shock-value thing with their band name, we’ll have you know that their name actually comes from a Ricky Gervais quote from The Office… Nothing lame about that (except that it’s a bad name for a band). But speaking of this album, with the incredibly long album title, it’s 50% Daft Punk B-sides and 50% horrible.


The Sword — Gods of the Earth
Jeph: I really like the stuff that metal bands like this one write about: Giants and ancient Hyperborian races and stuff (not that those particular subjects are covered on this album), but I think people are just kidding themselves when they say they actually like listening to metal. I wish people would write awesome metal lyrics about mystical warriors and stuff for modern folk and rap songs. That would be a lot better.

Meg: I grew up in Maple Ridge and I can honestly say that people that like metal are not kidding. In fact, they’re usually very serious.

Jeph: Like those Scandinavian black metal guys that burn down churches and stuff? Serious stuff. Serious stuff. Definitely. I more meant the sorts of people that have decent taste in music but then say they like a few metal bands too. Those guys have gotta be joking.