Why?, She & Him, Gnarls Barkley, and Flo Rida 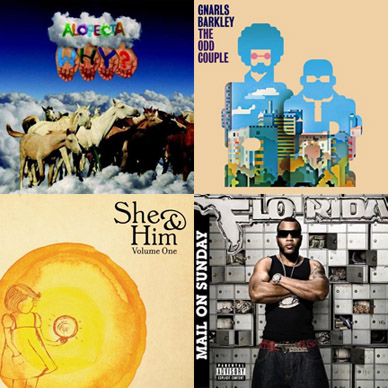 In one of the songs on here (we can’t be bothered to find out which one), the lyrics are all about how some gypsy tricked the singer out of some money in Berlin. Apparently the singer’s homies then have to convince him not to go after the gypsy because the gypsies probably have knives. Sorry to break it to you, Why?, but we saw you guys live and we’ve been to Berlin and seen a few gypsies in our day as well, and we can safely say that a gypsy could take you all on without any knives. But really, if you’re going to be making gypsies mad, that is the least of your worries. For those of you that read Stephen King’s Thinner, you already know that gypsies are also capable of casting a spell on you where you literally waste away to nothing. For those of you that haven’t read it, you might want to. It just might save your life.

Jeph: As a person that hates Cat Power and Jenny Lewis (musically, not as people), I’d have to say that this project is a lot better than a lot of the stuff that I would lump into this category. That’s not saying much, but I do find this pleasant to listen to.

Meg: Hmmm… At first I was just listening to this and thinking about how I probably wouldn’t want to listen to it much more, but that I really wanted to be friends with the singer, which is a great compliment because I don’t have very many friends. Then I started thinking, why would I want to be friends with some nobody-singer, when I could be friends with Lesley Arfin or Sarah Silverman? Then I found out that you used trickery and didn’t tell me that this was Zooey Deschanel’s album, even though you know I love her. She is probably not going to be friends with me, and neither are the other two. But now I love this album!

What can we say? Cee-lo Green has an otherworldly quality to his voice that is beautiful to listen to. Does that mean that we want to listen to it in combination with just anything? Like, for instance, another Danger Mouse project mostly consisting of songs your mom will play in the car? You have a gift, Cee-lo. Use it carefully. On the plus side, there was a big backlash against their last album because their first hit got way too big and over-hyped the whole project. There are no songs on this album that sound like hits, so they are not likely to have that problem again.

Jeph: The first song on this is called “Ack Like You Know.” It makes me wonder if Flo Rida will ever give up rapping, as many artists do, for a career in acking. Seriously folks, are we supposed to believe that he can spell the word “know,” but has trouble with the word “act?” “Know” has that tough silent “k!”

Meg: I thought “Money Right” with Rick Ross and Brisco was crazy, ‘cos it was like everything I’ve been going through lately was put into song form. “I got the money right…That’s what the bitches like.” Seriously. I work in a bank now. Nobody gets me like Flo Rida, Rick Ross, and Brisco.

Jeph: That’s true. That song is you in a nutshell.