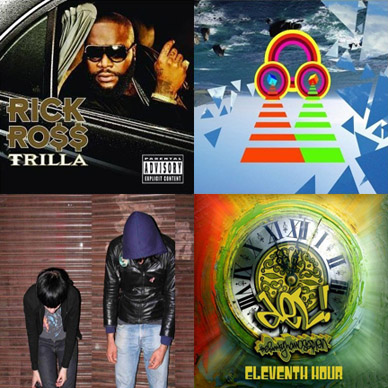 Jeph: In ten years, I wonder how many albums there are going to be where my favourite track is the one with T-Pain on it? I can’t help it. I love that guy. The rest of the album is so-so, but you can’t fail with T-Pain. It is possible to make a bad song with T-Pain (Chris Brown did it), but T-Pain’s part of any song is always shining.

Meg: That is so weird. I was just thinking the exact same thing about Nelly. It’s like how many albums will there be in the next century where the tracks he contributes to are the best? I can tell you one thing, however many there are, it won’t be enough.

Jeph: Yeah, there’s a lot of collaborations on here. I was expecting more from the R. Kelly track. They should have put Kels on the T-Pain track and made an “I’m a Flirt Part II”.

Meg: Whoah. You actually call R. Kelly, Kels? That is so cool. I love you so much right now.

Meg: Initially, I had really liked this album and my favourite part was the fact that it was only two songs long. Then I realized that you had only loaded two of the songs onto my iPod and that the whole thing was actually a lot longer. Now I’m kind of on the fence about the whole thing.

Meg: Or better yet, only listen to two of the songs.

We are Del experts. We have seen him live and listened to everything that he has ever recorded. As such, you can trust us when we tell you that this is a fine album. Nothing wrong with it. On the other hand, nothing really stands out. The beats are the same bouncy 8-bit funk that we heard back on Both Sides of the Brain, and the rest is just Del rapping. And if anyone out there considers themselves to be a Del purist or any fool thing, do not try calling us out. Remember, we are Del experts and we will school you. Especially don’t call us out on using the term “8-bit funk”. We used it and that’s that.