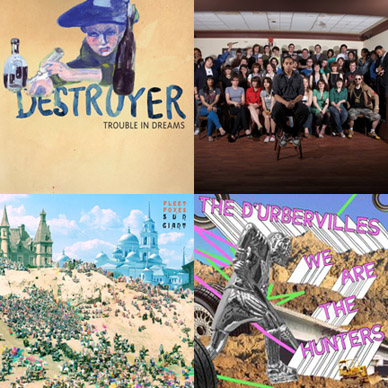 Jeph: I think this album sounds great. It’s always nice to see some good music coming out of this city. But I couldn’t help laughing at the the title to the first song “Blue Flower/Blue Flame”. Because the song is all about romantic type stuff and he mentions a blue flower in the song, I was curious about the second half of the title. It kind of put an image in my head of Dan Bejar lighting his farts on fire at the end of a nice date.

Meg: I can’t even believe you.

Afterparty Babies is one of the most fitting album titles we’ve seen in a long time, simply because you would have to be an actual baby to be impressed by this album. And trust us, impressing you was definitely what Rollie Pemberton had in mind with this record. The references to Tina Fey, The Wire and dating a flight attendant only left us about 24% impressed. But then again, maybe we’re just jealous ‘cos of how back when we were this guy’s age, we were probably just hanging out at the Douglas College cafeteria with Cameron Reed and some jock that was 7 feet tall. By the way, if you have a killer name like Rollie Pemberton, why on earth would you ever adopt some lame alias like Cadence Weapon?

On their MySpace page, these guys actually describe their music as “baroque harmonic pop jams”. We don’t know what they were listening to, because this EP sounds like the soundtrack to the George Clooney wank-fest, O Brother, Where art Thou?. OK, maybe not exactly, but it has the same nostalgic quality. Which works nice for a period piece soundtrack, but is lame on a new album of self-proclaimed pop music. Oh wait, we mean pop jams.


The D’Urbervilles — We Are The Hunters

Jeph: There’s not much to say about this. The songs are musically clever. A lot of drum-contest drumming going on. It sounds like someone has been watching some “How to Drum Fancy” DVDs. Maybe some Terry Bozzio or something. The music changes up a lot of times. Usually in a surprising way. When I think about it though, I can’t imagine I will ever listen to this again once this review is emailed in. The singing is embarrassing for everyone and the music is just cleverness and talent. There’s nothing to latch onto and enjoy.

Meg: You’re right, there is not much to say about this. Mostly ‘cos I only listened to one song from this album. I’m sorry. I really should have listened to the whole thing, I guess.