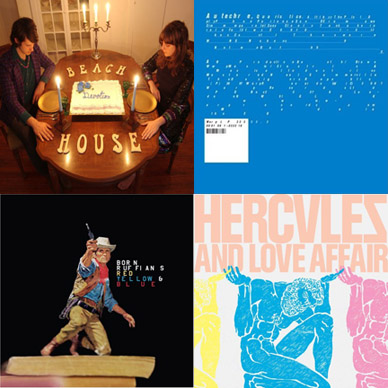 We remember a movie about a Beach House. Sandra Bullock bought it in the future and she used it’s mailbox as a time machine to send magical letters back and forth to Keanu Reeves in the past. Seriously, if you had access to a real time machine, would you really be able to think of some better use for it than being pen pals with Keanu Reeves? We didn’t think so. But now that we think about it, that movie didn’t have a beach house at all. It was actually a Lake House. And by the way, if anyone is wondering, this album gets a score of 45.

When we first heard Autechre on the soundtrack to Pi, we were both ravers and the music sounded pretty original and inventive compared to the progressive trance music that we heard at every party we went to. Ten years later, and Autechre is still playing the same song. Too bad Aranofsky is too busy making scenically-beautiful, sentimental garbage movies that star his girlfriend. Otherwise, this album would be totally useful for another one of his soundtracks. Maybe for Pi II.

One of the songs on here is called “Kurt Vonnegut”. In the book Mother Night by Kurt Vonnegut (and the movie with the same name, starring Nick Nolte), it is said and shown that ultimately you are what you pretend to be. These “Born Ruffians” guys are pretending to be about five or six really annoying things on this album, so if Vonnegut is right, they best watch their back.

Wow, listen to Mr. Fancy Voice with all of his fancy-person singing. Hercules & Love Affair think they are so royal. Not that there’s anything wrong with that. Most music is, and always has been, boring and predictable with little style or fanciness. So, all the power to Mr. Fancy Voice (AKA. Andy Butler) for rising above the usual garbage. We wish this album reminded us of a movie, because then this review would be more consistent with the other three.