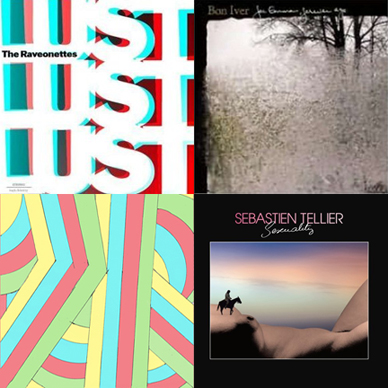 Maybe it’s just us, but it almost seems like The Raveonettes’ music actually sounded better back when it was featured in 2004 K-Mart commercials. We guess it’s just something to do with blue light specials, cafeteria food and the smell of senior citizens. That stuff just makes music sound better in general. Either way, this album is boring. Don’t buy it. Unless you’re a gay. (Just kidding. Only loves gays and wouldn’t ever inflict this album upon them).

Bon Iver – For Emma, Forever Ago

Meg: You know how sometimes when someone dies young, you can look back at old pictures of them and something in their eyes looks like they always knew they would never live to get old? This album kind of sounds like one of those pictures.

Jeph: No. I am not familiar with that experience. What kind of freaky pictures have you been looking at? All I thought about while listening to this is that I hate the sound of a guy singing while he plays an acoustic guitar. Unless it’s that dreamy Justin Nozuka. A Canadian and a charmer, that Justin Nozuka.

Meg: I would probably lend this album to my dead second cousin. I don’t really know what kind of music he likes ‘cos he died when I was nine, but I know that they played that song from the movie, Beaches at his funeral. Who knows, though. Maybe he would totally hate this album.

Before even listening to a second of this, we were praying that there were no lyrics at all on here. The band name and album title are so corny and typical that we knew that any lyrics on here would be equally bad. We were pleasantly surprised when we listened to it and found it to be a perfectly nice sounding instrumental album. There are four tracks, but really only two songs on here. It works fine for an EP, though. But, really? “Destroy Tokyo”? “Shapes”? These guys should have just let their record label come up with their band name.

Jeph: In France everyone thinks that it’s sexy when a white guy talks slowly over mellow music. In real life (North America), that is probably one of the least sexy things there is.

Meg: Yeah, probably the most sexy thing would be a collaboration between Salt’N‘Pepa and Steve Buscemi. They actually understand music and sex appeal.