Hot Chip, Dead Meadow, This Will Destroy You & Xiu Xiu 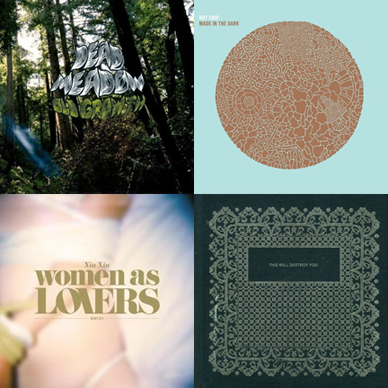 Hot Chip — Made in the Dark

We hadn’t heard of these guys before this album. With them being from the UK and their name being what it is, we were mostly just glad that they don’t sound exactly like Franz Ferdinand. The dance songs are dancey, so there’s not much to say about those. We listened to them while walking through the snow in gumboots and that was pretty fun. Just kidding! Only Jeph had gumboots on. The slow ballads (such as the title track) are pretty despicable. We recommend that you take some masking tape and cover up those tracks on the record so that they don’t ever accidentally come on and ruin your day.

Meg: Isn’t it just perfect when music sounds exactly the way you would expect it to, based off its album title and band name?

Jeph: Yeah. It makes me feel a lot better about judging other bands by their name without listening to them. We could have easily reviewed this just by its name. There are a lot of local bands with names like this that I always assumed sounded like this, and I now feel better about the fact that I’ll never give them a chance. Not that these guys sound bad. They’re good at what they do.

No fucking way. This album won’t destroy you. This album won’t even scratch you. Unless, of course, you always get destroyed by the background noise in your grandma’s laundry room. We’d love to meet the person that is destroyed every time they hear instrumental post-rock.

Meg: I can’t fucking wait to hear what kind of snobby opinion you have about the cover of “Under Pressure.” This is going to be so good.

Jeph: Thanks. Glad to see you have so much sarcastic faith in me. You’re right anyway. I thought the album itself is fine. The percussion is excellent and the singing is not too annoying most of the time. Most Xiu Xiu fans will probably continue being Xiu Xiu fans when they hear this. But I did think the Bowie/Queen cover failed. I think the two tests for a cover are whether you choose a good song to cover and then if you do something interesting with it. First off, “Under Pressure” is not an interesting song to cover. Second, though some people might think the dynamic is interesting because they bring Michael Gira into the mix, I think it would have been much better if they brought in Michael Cera. That kid is hilarious!