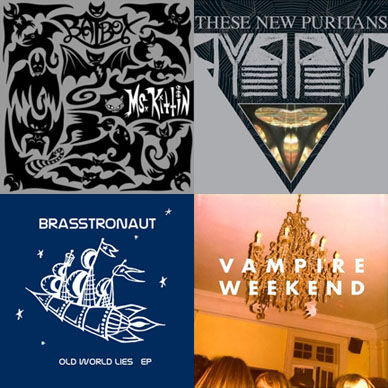 A staff member at a New Jersey radio station recently did an experiment that proved that if Britney Spears’s latest album had been packaged as a German electro-clash album, it would get a lot more respect. Obviously. This album by Miss Kittin goes further to prove the point. It sounds almost like an exact replica of Britney’s “Blackout”, but you wouldn’t guess that from what people have written about it. It’s almost impossible not to imagine these songs being performed by some Amy Poehler character on Deep House Dish. And for the record, we do not think this album is deep house. We know it isn’t deep house. It just sounds like an act that would play on SNL‘s Deep House Dish, OK?

Jeph: I was really glad to see that these guys really are British. When I heard the really stereotypical British accent I was really worried these guys would be from New York or Boston, but then the accent ended up being real.

Meg: These guys’ accents are the least of my worries.

Jeph: I like how these guys talk so much about numbers. Usually rappers from the Nation of Gods and Earths (like Brand Nubian or Gang Starr) seem to have a monopoly on numerology in music. It’s about time some dorky British kids tried their hand at it.

Meg: I bet that’s not all they try their hands at.

It is always funny when a band uses some sort of pun in their band name that is related to the music they play. Funnier yet, if you put your style of music in your band name: like Papa Surf or Skabba the Hut. Fucking hilarious, actually. In any case, Brasstronaut still ranks up there as one of the best of these kinds of names. But don’t let the name fool you. If you were expecting a barrel of laughs to help you get over Heath Ledger’s mysterious and tragic death, this is not the album. In fact, after listening to this album, we were both found naked, lying face down on our apartment floor, surrounded by scattered pills. Actually, they were just prescription sleeping pills, and they were still in the bottle. I guess we just fell asleep, really.

Jeph: This is the second band that I’ve heard that is inspired by African soukous music. I’ve still never heard a soukous band with an African guy in it. Even though I kind of like this album, I think it is funny how white people these days are so bored of stealing African-American music that they are just going straight to the source and stealing music from the Africans themselves.

Meg: Are you sure these guys aren’t African?

Jeph: The keyboardist is named Rostam Batmanglij. So that might mean they’re not all WASPs. But they all just look like white guys from New York.

Meg: You look like a white guy from New York. Literally.