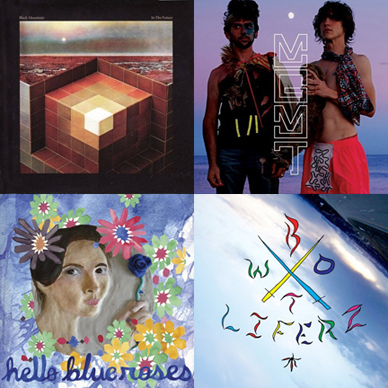 Meg: That’s just you, though. You’re the kind of guy who likes “good rock” and is deathly afraid of repetitive singing.

Jeph: I dunno. It’s all about how they say it. It gives me the spooks something awful – as if evil spirits are trying to get down my throat and into my heart. Yikes! Good album, though. I might lend it to my brother.

Meg: Good idea. I just hope this album doesn’t give your brother “the spooks something awful”.


MGMT — Oracular Spectacualr
Whenever we have to review albums that are entirely instrumental, Jeph usually complains about the lack of singing and makes some long-winded statement about how instrumentals are boring. This album is one of those cases where we both agree that the absence of lyrics and singing would have been a bonus. The music and recording both succeed (they sound pretty good, in fact), but the lyrics would have been more appropriate if they were written on some junior high student’s binder or jeans. And the singing is as obnoxious as the band’s bio (on their website).

Jeph: I noticed something too. The singer (the person in the band that isn’t Dan Bejar) is a visual artist, and the album title is about painting a portrait. I guess that’s something. Some sort of coincidence maybe. Or it might be an intention of some sort. Either way, I noticed it.

Jeph: That’s for sure.


Blood on the Wall — Liferz
Nobody needs to make this music. It’s just not called for.