Pylon, Wu-Tang Clan, Taxes & There Will Be Blood 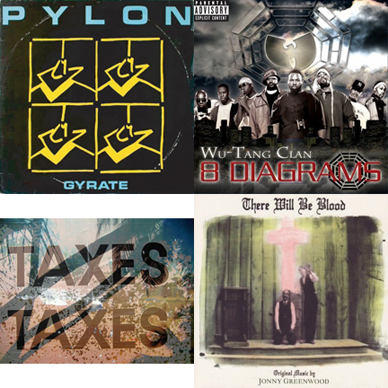 Pylon — Gyrate Plus
Meg: Hmmm… This band makes me think of the fictional band, Ivan and the Terribles from the movie, Motel Hell. I guess the main differences would be that this band is more new-wave and doesn’t feature a leather-clad John Ratzenberger as their drummer. Also, Pylon is a lot less fictional than Ivan and the Terribles.

Jeph: Wow. That’s way better than my initial thoughts on this album. I just don’t see why so many people are so excited about this getting re-released now. I get that this is some seminal band that influenced everybody, but that just means that today a billion bands sound like this. So the album is awesome for everyone that heard it before all the new bands, but it’s pretty boring if you’ve already listened to the thirty Vancouver bands that sound like this getting played on CJSF or CiTR or playing live at any shitty East Van pub.


Wu-Tang Clan — 8 Diagrams
The Wu-Tang Clan has finally recovered. We are so glad to hear this album. Their last two albums (The W and Iron Flag) were better than a lot of people give them credit for, but they were nothing compared to their first two classics. This brings the group back to their former glory. Except for the horrible re-imagining of The Beatles “While My Guitar Gently Weeps”. This song really proves why John Frusciante is not an official member of the Wu-Tang Clan. While we wish we were reviewing four different versions of 8 Diagrams this week (seriously, it’s that good), the fact that this album comes minus ODB makes it a little bittersweet. By the way, Cappadonna, one less member of the Wu-Tang Clan does not make you an official member. For those of you down with the supreme mathematics, nine members minus one equals just 32 chambers!


TAXES — Crystal Gravy EP
Jeph: I love how much work these guys put into the cover of this EP. It looks kind of like a Martha Stewart craft. The album sounds kind of like it was recorded in an out-house though.

Meg: You are so mean. They probably wanted it to sound like that.

Jeph: I’m mean? I didn’t say there was anything bad about recording in an out-house. Perhaps you are just projecting your own opinions onto my words. Maybe you took offense to the song “The Suburbs are Killing Us”, because of how me and you live in and love the suburbs?

Meg: Is Little Korea a suburb?


Jonny Greenwood — There Will Be Blood Original Soundtrack
By this point, most people seem to be on the same page about P.T. Anderson kind of being a genius when it comes to his movie soundtracks (although one of us [Jeph] totally hated Aimee Mann’s contribution to Magnolia). And even though Jonny Greenwood’s score may very well be seamless when played over the new P.T. Anderson movie, right now it just sounds like some boring classical album that a guy from Radiohead would make.