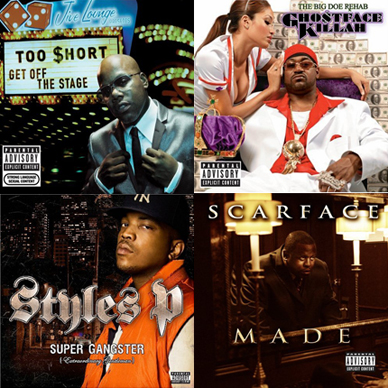 Too $hort — Get Off The Stage
Jeph: Even though there are a bunch of really great songs on here, I kind of get the impression that Too $hort wasn’t really trying. Usually rap albums are either energetic, smooth or reflective (in my humble opinion). This one is none of those things, which means it’s really just a guy talking about stuff for a while.

Meg: I think every song in the world is just a guy talking about stuff. But let’s be serious, here. While Too $hort does seem to raise some valid points about groupies interfering with his job, I feel like he’s being a little unfair. I mean, only letting ladies strip on stage if they have a certain bra size? I’m not mad at him, it’s his own opinion, but I can certainly see why Tipper Gore wouldn’t like this album. I think she’s only a B-cup.

Jeph: Yeah. Tipper would probably prefer the song “Pull Your Panties Down”. As a wise man once told me: “the beaver is the essence of a woman.”

Meg: Actually, if I remember correctly, he was actually telling me about the essence of a woman. He was just trying to get you to back him up.


Ghostface Killah — The Big Doe Rehab
Ghostface is on a winning streak. Everything he puts out these days gets tons of critical respect and we’re pretty sure it sells some copies too. The production on this album is a little weirder than his last couple albums and the lyrics are a little more accessible. That’s OK though, ‘cos if there’s one thing we’re not against, it’s having access. Access to Ghostface Killah! However, one thing we are against is bad skits on hip-hop albums. We don’t care if there is a writer’s strike going on or not, just don’t do it. Don’t write your own bad skits about you stealing some guy’s wife at the Cabana and then shooting a bunch of people… Trust us, the idea of this kind of skit is a lot cooler than the reality of this kind of skit.


Styles P — Super Gangster (Extraordinary Gentleman)
Meg: This guy seriously is a gangster and a gentleman. He can rap, he has the best skits, and he loves Malcom X, which pretty much makes him the perfect guy. You know, like, the kind of guy that makes you want to slip off your wedding ring when you talk to him.

Jeph: I don’t know about that, but this album was a pretty nice surprise. I usually don’t listen to albums that have Jadakiss on them, just because I think the name Jadakiss is one of the lamest rapper names of all time. Oh, and if you want to get with Styles P, you should check out his song “Look at Her”, where he describes what he likes in a lady: small with a lot of bang (like a .22), and reminding one of a car (perhaps an Audi).

Meg: Yeah, I guess it doesn’t really sound like me and Styles P are all that compatible. Plus, he claims that “Look at Her” is for the ladies, but I feel like it’s really more about the ladies than for the ladies. Or, maybe it’s just for some ladies that happen to look like cars?


Scarface — Made
One of the great things about this album is that it really could have come out in the mid-nineties. There are a couple modern southern rap influences in some of the beats, but overall the rapping and a lot of the beats sound like old Geto Boys and old Scarface. In case you didn’t hear, that means this album is good. And not to be insensitive or anything, because it really sucks when one of your friends kills themselves, but does that merit a four minute song? He wasn’t our friend, Scarface, so next time why don’t you just write a three minute song about your dead friend and save us a minute of being bored.