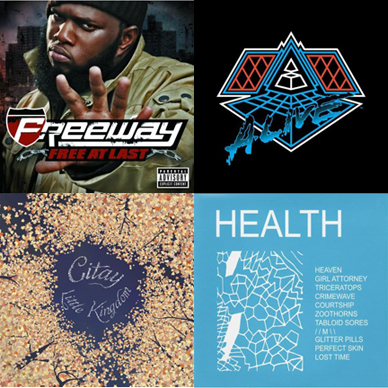 Freeway — Free At Last
Back when we first started going out, we remember all this hype about Freeway and how he was going to reinvent hip-hop. He put out one album and then we didn’t hear a thing about him for years. Now he’s all bragging about having $30 mil in the bank and we just don’t buy it. I mean, we totally hope you have $30 mil in the bank, Freeway, ‘cos in this game (the game of rapping and album reviewing), you have to be smart with your money because you can lose everything in a second. Why do you think we save every single dollar we earn from writing this column? In any case, this album is genius. For instance, did you know that Freeway actually used to make his own knock-off Le Tigre shirts back before he was a famous Rockafella Billionaire? No, you didn’t know that? Then I\we guess you just didn’t bother to listen to “Reppin’ the Streets.” Too bad for you. The long wait between albums was worth it. Congrats, Freeway!


Daft Punk — Alive 2007
Jeph: When I first heard a significant portion of these guys’ Homework album, I was getting to be too snobby of a raver to buy their CD, which I later regretted, because it was a really great album and being a raver was really stupid. But then I felt vindicated when these guys started putting on those ridiculous robot suits and being retro disco robots. This album is kinda fun though.

Meg: You’re right, you were ridiculous then. It’s not robot suits though — it’s actual robots and they’re amazing.

Jeph: Nah, it’s just these two French jerk-offs, but they know their way around a sequencer, so that’s good. I think this would be a fun album to throw on Christmas morning when you’re opening presents. I don’t know why. It’s just so positive and invigorating.

Meg: Seriously, you couldn’t sound more like a French jerk-off if you tried. “Positive… invigorating.” I can’t wait until Christmas. You’re totally not going to play this album.


Citay — Little Kingdom
It’s always nice to give every song a chance and listen to it from start to finish before judging it. But sometimes that’s just not possible. If a song just keeps repeating the same loop over and over for three minutes, we’ll often be tempted to skip to the next song. For this reason, we didn’t realize until half-way through this album that any of these songs actually had singing on them. Often the singing on these songs doesn’t come until thirteen or fourteen minutes into a repetitive sleigh-bell solo. These songs aren’t bad to listen to on the fast-forward setting of your music player, but you probably don’t want to listen to them in their entirety. Unless, of course, you are this band’s dad. If you are this band’s dad, you are going to be so proud.


Health — Health
Jeph: There’s not much to say about these guys. It’s always easier to criticize a bad band than to compliment a good one, unless you want to just say a bunch of boring stuff about how efficient the production on a band’s album is or how perfectly the layers in someone’s songs go together or something. This album is just some really good noisy rock and I would certainly recommend it to people that like that sort of thing.

Meg: Yeah. I totally wish your band sounded like this. A +.