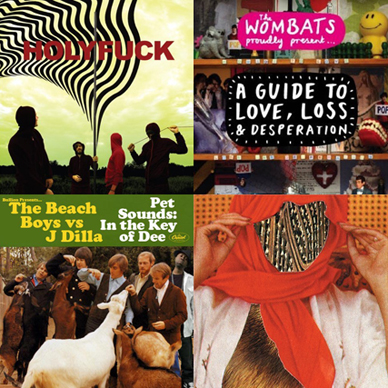 Holy Fuck — LP
Jeph: There’s no need to shock everyone with a potty-mouth band name, but these guys are pretty good anyway. All this music sounds great. I’d really urge this band to keep with what they’re doing.

Meg: For sure. But seriously, these guys should take a cue from Will Smith and keep it clean. No curse words in his rhymes and he still wins Grammys. And he believes in thetans.

Jeph: Yeah. These guys should keep with the same great music, but change their name to something really positive. Something I can ask for at the CD store. Then they should get Will Smith to rap over their music. I’ve said it before and I’ll say it again. Instrumentals have their place, but after a while I want to hear some singing. Really, though, this is some great stuff: crazy sounds and all that. I’d definitely recommend it to some people.

Meg: BTW, I was totally just kidding about Will Smith. I love swear words!


The Wombats — Proudly Present a Guide to Love, Loss & Desperation
This album starts out with an old-timey barbershop harmony. Not a bad way to start an album (obviously), but there’s a lot of really bad stuff on here as well. You know, like too many Shakespeare references, songs about not understanding girls, and how they all just really love Joy Division. Lots of us studied English Lit, don’t understand girls, and really love Joy Division; but that doesn’t exactly mean we have to waste everyone’s time by singing about it in Liverpool accent. That’s probably the last thing we would do.


Bullion — Pet Sounds: In the Key of Dee
Meg: When I was in elementary school, I got pressured to sleep over at this girl’s house and she was really religious and wanted to be an actress on Road to Avonlea. We weren’t allowed to watch TV or eat chips at her house and I felt like she listened to baby music, so we went through her parents’ records and eventually listened to Pet Sounds and it was so cool.

Jeph: I think that Pet Sounds is the most over-rated album of all time. But this Bullion remix album brings it closer to what people credit it as. He makes the boring original sound inventive and fresh. I swear, the Beach Boys are the only band that could turn the theremin into a conservative and boring instrument. Oh yeah, we should probably mention that this album is free on the internet, and if you go to Bullion’s MySpace page, you’ll see that it’s not really a Grey Album style mash-up project like Exclaim! magazine implies that it is.

Meg: OK, maybe Pet Sounds is a little bit over-rated, but you have to admit, it’s a lot better than baby music. I hated baby music in grade five.


Yeasayer — All Hour Cymbals
Sometimes on this album these guys have a cool Phil Collins sort of thing going on. Which is pretty great. At other times they’re doing some nice Peter Gabriel sort of stuff. But it’s when they’re doing their own thing that the trouble starts. The contrived accents in the singers’ voices got pretty annoying in a large number of these songs. It’s like, do you want to listen to a bunch of guys from Brooklyn trying to sound like 1980’s English guys, or would you rather just listen to Tears for Fears. It’s just one of those choices that everyone has to make for themselves.