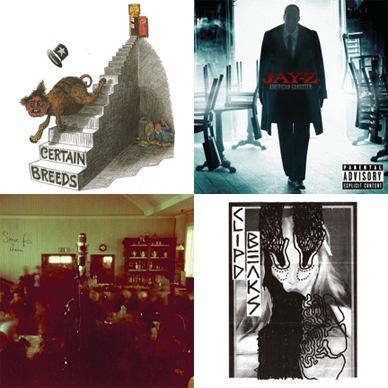 Certain Breeds — Certain Breeds
Jeph: When I tried to find out more about these guys on the internet, it mostly just brought up stuff about different dog breeds. It did bring up their MySpace page. But most of the sites were kennel club stuff. So, now I know a lot more about dogs than I do about this band. The album sounds good, though. A lot of circus organ. And I think some of these songs might be waltzes!

Meg: Yeah, this music is perfect for a horror movie about evil dolls, but I found some of it a little unbelievable. Like on Track 08, when the lady sings: “I used to have a pony/ I think his name was Sampson.” Seriously, I’m supposed to believe that she actually had her own pony and now she can’t even remember the name? Total liar.

Jeph: That’s true. Especially with a memorable name like Sampson. I would like to name a dog “Mark”. Or would that be weird? Having a little dog named “Mark”?

Meg: Jeesh. You won’t even let me have a bunny.


Jay-Z — American Gangster
American Gangster is just another piece of evidence that Jay-Z should have stayed retired. The album is better than his last effort, but it seems like instead of still doing songs about being a crack dealer, he should be doing a lot more songs about being a senior citizen businessman. “Success” featuring Nas comes close, but all Nas’ stupid bragging about how he has an apartment in the Trump Tower that he only slept in once just pissed us off. What’s Jay-Z’s problem anyway? Did he just get bored of presenting us with the next Rihanna and yachting around the South of France with Beyonce? We wouldn’t.


Sigur Ros — Hauf/Heim
Meg: One of my old film professors used to be super into Sigur Ros and I guess that’s how I would describe this album: music to put on a mixtape to impress your aging film professor.

Jeph: On their Wikipedia page, it mentions that they used one of these guys’ songs in a commercial for the TV show “Frasier”. I really want to see that “Frasier” commercial. This album is all rarities and acoustic versions of previously recorded songs, but I don’t think the “Frasier” song is on here.

Meg: I hope that they did a cover of the “Frasier” theme song. These guys singing about “tossed salad and scrambled eggs” in a faux blues style would be genius.

Jeph: I’m guessing from this album that the song was probably a slow piano arpeggio with slower strings in the background and weird high-pitched James Blunt-sounding vocals.


Clipd Beaks — Hoarse Lords
Though we like the sound of this, it is quite abrasive and we do not find ourselves in a lot of situations where we can listen to this sort of thing. It would be pretty weird to listen to music this hardcore on the bus. But, if we listen to it when we’re at home making spaghetti, it seems even more out of place. All sorts of great sounds on here. And the songs aren’t repetitive (as they are on so many albums these days). These guys have their thumbs in varied pies, as they say. And as for us? We just don’t have a very hardcore lifestyle.